Two new 110 million-year-old dinosaurs unearthed in the Sahara Desert highlight the unusual meat-eaters that prowled southern continents during the Cretaceous Period. Named Kryptops and Eocarcharia in a paper appearing this month in the scientific journal Acta Palaeontologica Polonica, the fossils were discovered in 2000 on an expedition led by University of Chicago paleontologist Paul Sereno.

Sereno and co-author paleontologist Stephen Brusatte of the University of Bristol say the new fossils provide a glimpse of an earlier stage in the evolution of the bizarre meat-eaters of Gondwana, the southern landmass. “T-rex has become such a fixture of Cretaceous lore, most people don’t realize that no tyrannosaur ever set foot on a southern continent,” said Sereno. Instead, particularly distinctive meat-eaters arose, some of which bore no resemblance to the “tyrant king,” beyond their appetites for fresh meat. 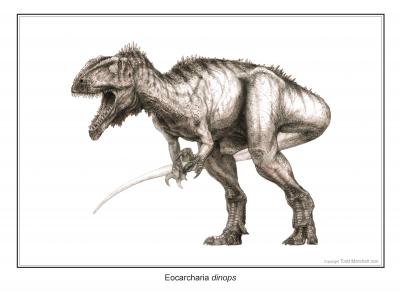 A similar-sized contemporary, Eocarcharia dinops, or “fierce-eyed dawn shark,” was so named for its blade-shaped teeth and prominent bony eyebrow. Unlike Kryptops, its teeth were designed for disabling live prey and severing body parts. Eocarcharia and kin (called carcharodontosaurids) gave rise to the largest predators on southern continents, matching or exceeding Tyrannosaurus in size. Eocarcharia’s brow was swollen into a massive band of bone, giving it a menacing glare. 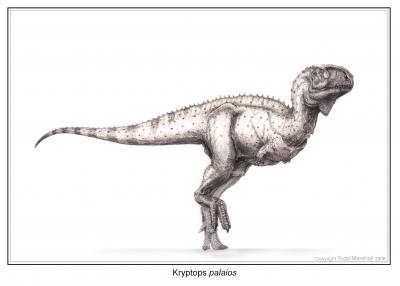 “Brow-beating may not be far from the truth,” remarked Sereno. He and Brusatte suggest in the paper that the robust bony brow in Eocarcharia and kin may have been used as a battering ram against rivals for mating rights.

The fossil area, in present-day Niger, was home to a panoply of bizarre species. The hyena-like Kryptops, the shark-toothed Eocarcharia and the fish-eating, sail-backed Suchomimus (“crocodile mimic”) constitute a meat-eating trio that characterizes the Cretaceous Period in Africa and possibly other southern landmasses.

They preyed upon the ground-grubbing, long-necked plant-eater Nigersaurus and lived alongside the enormous extinct crocodilian nicknamed “SuperCroc” (Sarcosuchus). Then, the African continent was part of Gondwana and just beginning to free itself of its land connection to South America.

Funders of the research include the National Geographic Society, The David and Lucile Packard Foundation, the Pritzker Foundation and the Women’s Board of the University of Chicago.

The scientific paper is available at http://www.app.pan.pl.