New evidence of a carnivorous killer has been found in Africa. This ancient killer almost had the misfortune of going extinct twice.

While evidence of 95-million year old therapods from Africa is quite scare making one think that each fragment would be treated like gold, this was not the case the first evidence of Carcharodontosaurus iguidensis, a newly described dinosaur from the Cenomanian of Nigeria and published in the December 2007 issue of the Journal of Vertebrate Paleontology. 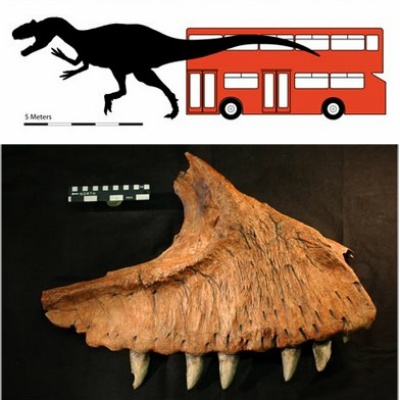 Tooth fragments collected by Charles Depéret and J. Savornin in 1927 were misplaced before this meat-eater could ever be described and when additional material was collected in Egypt in the 1930’s it also came to an unfortunate end.

Sent to German paleontologists in Munich to describe, the fossils were lost in the rubble as Allied Forces bombed the building in which they were housed during WW II. But the rocky history and luck of Carcharodontosaurus iguidensis improved when paleontologist Paul Sereno found cranial material on a Moroccan dig in 1996.

That find combined with material collected the following year in Nigeria were studied by Sereno, along with Steve Brusatte, a paleobiologist at the University of Bristol in England, and Paul Sereno and determined to be a new species, not C. saharicus as originally thought.

Extending upwards of 14 meters (44 ft), nearly as long as Tyrannosaurs, alive today they could easily peer through a second story window - a menacing thought as they were well-equipped hunters with sizable teeth.

The climate was much warmer when Carcharodontosaurus iguidensis and C. saharicus roamed the Earth and the seas much higher. Beyond geographic distance, the raised sea level may have been what set these therapods apart.

Shallow seas separated what is now Morocco and Nigeria and this separation may have prompted the development of the unique characteristics define the two species.. Perhaps more abundant prey and favorable conditions allowed Carcharodontosaurus iguidensis to grow to their huge size while C. saharicus remained a smallish 1.6 meters (5.2 ft).

While not a reptile, C. saharicus has been compared with modern Crocodylia, another group who first appeared in the Cretaceous, as they share similar inner ear anatomy and cerebrum size relative to total brain. Like many therapods prior to the 1930’s, the African species were originally misgrouped into the genus Megalosaurus. Paleontologist Ernst Stromer von Reichenbach corrected this error.

After taking a closer look at their anatomy, particularly their dentition, he renamed them Carcharodontosaurus in 1931 citeing their "mainly Carcharodon-like teeth", which were "not recurved, almost bilaterally symmetrical but with convex edges”

Brusatte, S. and Sereno, P.C. (2005). "A new species of Carcharodontosaurus (Dinosauria: Theropoda) from the Cenomanian of Niger and its implications for allosauroid phylogeny." Journal of Vertebrate Paleontology, 25: 40A.

Brusatte, S.L. and Sereno, P.C. (2007). "A new species of Carcharodontosaurus (dinosauria: theropoda) from the Cenomanian of Niger and a revision of the genus." Journal of Vertebrate Paleontology, 27 (4).