In the rapid and fast-growing world of nanotechnology, researchers are continually on the lookout for new building blocks to push innovation and discovery to scales much smaller than the tiniest speck of dust.

In the Biodesign Institute at Arizona State University, researchers are using DNA to make intricate nano-sized objects. Working at this scale holds great potential for advancing medical and electronic applications. DNA, often thought of as the molecule of life, is an ideal building block for nanotechnology because they self-assemble, snapping together into shapes based on natural chemical rules of attraction. This is a major advantage for Biodesign researchers like Hao Yan, who rely on the unique chemical and physical properties of DNA to make their complex nanostructures. 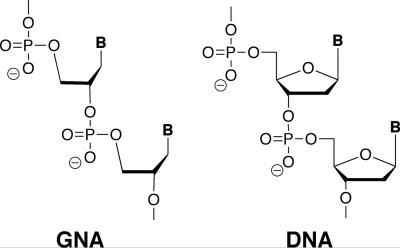 The only chemical difference between DNA and a synthetic cousin, GNA, is in the sugar molecule. GNA uses a three-carbon sugar called glycerol rather than the five-carbon deoxyribose used in DNA. The sugar provides the chemical backbone for nucleic acid polymers, anchoring a phosphate molecule and nitrogenous base (B). Credit: Biodesign Institute at Arizona State University

While scientists are fully exploring the promise of DNA nanotechnology, Biodesign Institute colleague John Chaput is working to give researchers brand new materials to aid their designs. In an article recently published in the Journal of the American Chemical Society, Chaput and his research team have made the first self-assembled nanostructures composed entirely of glycerol nucleic acid (GNA)— a synthetic analog of DNA.

“Everyone in DNA nanotechnology is essentially limited by what they can buy off the shelf,” said Chaput, who is also an ASU assistant professor in the Department of Chemistry and Biochemistry. “We wanted to build synthetic molecules that assembled like DNA, but had additional properties not found in natural DNA.”

The DNA helix is made up of just three simple parts: a sugar and a phosphate molecule that form the backbone of the DNA ladder, and one of four nitrogenous bases that make up the rungs. The nitrogenous base pairing rules in the DNA chemical alphabet fold DNA into a variety of useful shapes for nanotechnology, given that "A" can only form a zipper-like chemical bond with "T" and "G" only pair with "C."

In the case of GNA, the sugar is the only difference with DNA. The five carbon sugar commonly found in DNA, called deoxyribose, is substituted by glycerol, which contains just three carbon atoms.

Chaput has had a long-standing interest in tinkering with chemical building blocks used to make molecules like proteins and nucleic acids that do not exist in nature. When it came time to synthesize the first self-assembled GNA nanostructures, Chaput had to go back to basics. “The idea behind the research was what to start with a simple DNA nanostructure that we could just mimic.”

The first self-assembled DNA nanostructure was made by Ned Seeman’s lab at Columbia University in 1998, the very same laboratory where ASU professor Hao Yan received his Ph.D. Chaput’s team, which includes graduate students Richard Zhang and Elizabeth McCullum were not only able to duplicate these structures, but, unique to GNA, found they could make mirror image nanostructures.

In nature, many molecules important to life like DNA and proteins have evolved to exist only as right-handed. The GNA structures, unlike DNA, turned out to be ‘enantiomeric’ molecules, which in chemical terms means both left and right-handed.

“Making GNA is not tricky, it’s just three steps, and with three carbon atoms, only one stereo center,” said Chaput. “It allows us to make these right and left-handed biomolecules. People have actually made left-handed DNA, but it is a synthetic nightmare. To use it for DNA nanotechnology could never work. It’s too high of a cost to make, so one could never get enough material.”

The ability to make mirror image structures opens up new possibilities for making nanostructures. The research team also found a number of physical and chemical properties that were unique to GNA, including having a higher tolerance to heat than DNA nanostructures. Now, with a new material in hand, which Chaput dubs ‘unnatural nucleic acid nanostructures,’ the group hopes to explore the limits on the topology and types of structure they can make.

“We think we can take this as a basic building block and begin to build more elaborate structures in 2-D and see them in atomic force microscopy images,” said Chaput. “I think it will be interesting to see where it will all go. Researchers come up with all of these clever designs now.”