NASA's sun-focused STEREO spacecraft unexpectedly detected particles from the edge of the solar system last year, allowing University of California, Berkeley, scientists to map for the first time the energized particles in the region where the hot solar wind slams into the cold interstellar medium.

Mapping the region by means of neutral, or uncharged, atoms instead of light "heralds a new kind of astronomy using neutral atoms," said Robert Lin, UC Berkeley professor of physics and lead for the suprathermal electron sensor aboard STEREO. "You can't get a global picture of this region, one of the last unexplored regions of the heliosphere, any other way because it is too tenuous to be seen by normal optical telescopes."

The heliosphere is a volume over which the effects of the solar wind extend, stretching from the sun to more than twice the distance of Pluto. Beyond its edge, called the heliopause, lies the relative quiet of interstellar space, at about 100 astronomical units (AU) - 100 times the Earth-sun distance. 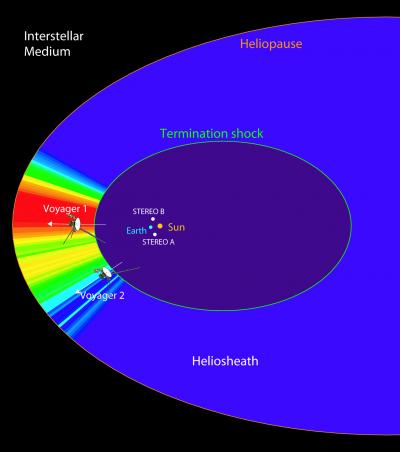 STEREO detected energetic neutral atoms (ENAs) from the edge of the solar system, where the solar wind meets the interstellar medium. Hot ions in the heliosheath -- the region between the termination shock and heliopause -- are uniquely traced by ENAs and are more intense (indicated by color code) around the nose of the heliosphere, with an asymmetric double peak. The twin STEREO A and B spacecraft are shown in the sun-centered orbit they share with Earth. Last year, the Voyager 2 spacecraft passed into the heliosheath, joining Voyager 1. There, these interstellar explorers continue their journey into the farthest reaches of the heliosphere. Credit: University of California, Berkeley; L. Wang

The results, reported in the July 3 issue of the journal Nature, clear up a discrepancy in the amount of energy dumped into space by the decelerating solar wind that was discovered last year when Voyager 2 crossed the solar system's termination shock and entered the surrounding heliosheath. The termination shock is the region of the heliosphere where the supersonic solar wind slows to subsonic speed as it merges with the interstellar medium. The heliosheath is the region of roiled plasma between the shock front and the interstellar medium.

The newly discovered population of ions in the heliosheath contains about 70 percent of the energy dissipated in the termination shock, exactly the amount unaccounted for by Voyager 2's instruments, the UC Berkeley physicists concluded. The Voyager 2 results are reported in the same issue of Nature.

The twin STEREO spacecraft were launched in 2006 into Earth's orbit about the sun to obtain stereo pictures of the sun's surface and to measure magnetic fields and ion fluxes associated with solar explosions.

Between June and October 2007, however, the suprathermal electron sensor in the IMPACT (In-situ Measurements of Particles and CME Transients) suite of instruments on board each STEREO spacecraft detected neutral atoms originating from the same spot in the sky: the shock front and the heliosheath beyond, where the sun plunges through the interstellar medium.

"The suprathermal electron sensors were designed to detect charged electrons, which fluctuate in intensity depending on the magnetic field," said lead author Linghua Wang, a graduate student in UC Berkeley's Department of Physics. "We were surprised that these particle intensities didn't depend on the magnetic field, which meant they must be neutral atoms."

UC Berkeley physicists concluded that these energetic neutral atoms were originally ions heated up in the termination that lost their charge to cold atoms in the interstellar medium and, no longer hindered by magnetic fields, flowed back toward the sun and into the suprathermal electron sensors on STEREO.

"This is the first mapping of energetic neutral particles from beyond the heliosphere," Lin said. "These neutral atoms tell us about the hot ions in the heliosheath. The ions heated in the termination shock exchange charge with the cold, neutral atoms in the interstellar medium to become neutral, and then flow back in."

According to Lin, the neutral atoms are probably hydrogen, since most of the particles in the local interstellar medium are hydrogen.

The charge exchange between hot ions and neutral atoms to generate energetic neutral atoms is well known around the sun and planets, including Earth and Jupiter, and has been used by spacecraft such as IMAGE and Cassini as a means of remotely measuring the energy in ion plasmas, since neutral atoms travel much farther than ions. A new NASA mission, the Interstellar Boundary Explorer (IBEX), is planned for launch later this year to map more thoroughly the lower-energy energetic ions in the heliosheath by means of energetic neutral atoms to discover the structure of the termination shock and how hydrogen ions are accelerated there.