Scientists of the Soil Science and Geopharmacy Research Group of the University of Granada (Spain), directed by Rafael Delgado, have discovered and characterized a new type of atmospheric aerosols named ‘iberulites’, which could be useful for the study of relevant atmospheric reactions from Earth.

Researchers José Luis Díaz Hernández, of the Andalusian Research and Farming, Fishing, Food, and Ecological Production Training Institute and Jesús Párraga Martínez, of the Department of Edaphology and Farming Chemistry of the University of Granada, have insisted that such iberulites form in the troposphere from mineral small grains emitted from desert soils and bordering regions, burst into the atmosphere in a chaotic way, collect water vapour which becomes condensed and make up little rain drops.

"As we all know, the Sahara is a powerful emitter of atmospheric dust, which travels to the Amazon and Caribbean regions, including Florida, also reaching the North of Europe, Israel and even the Himalayas. Such mineral grains, which contain iron, calcium, sulphur and sometimes phosphorus, fertilize the soil, forests and plankton of the oceans, lakes and seas they go through," they write. 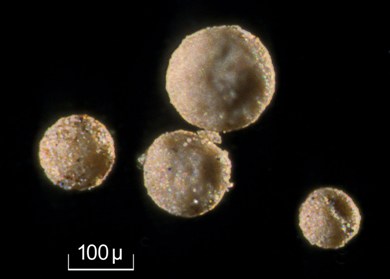 Set of Iberulites observed with optical microscope, characterized by their pink color, their spherular shape (micro-spherule) and the vortex.

Such small drops of water and mineral dust grow in size as they collide with others and capture more dust, and are subject to characteristic hydrodynamic processes. As they get dry, they are swept away by powerful air drafts. During this trip –which can take several days- the iberolites experience a series of physical-chemical reactions and processes simultaneously, such as the incorporation of SO2 from volcanic areas (the Canary Islands), or the adhesion of planktonic organisms, virus and marine salts in the surface of the immature iberulite as they get close to the Atlantic area of Portugal, Morocco and the Gulf of Cádiz.

The images of the iberulites taken with electronic microscopy, carried out in the Centre for Scientific Instrumentation of the UGR, are quite novel and give evidence of it.

Hydrodynamic processes, mechanically generated in such minuscule water and dust drops, form the shape of the artefact until it becomes a new atmospheric aerosol particle called iberulite with a vortex, quite similar to a micro spherulite. The researchers have pointed out that, obviously, “the fact that they have been colected in Granada does not exclude that, due to gravity, the biggest ones also fall in the Earth’s surface before arriving here”.

The relevance of the discovery, Professor Párraga says, is that “the atmosphere sends us a ‘present’ manufectured by her, which tells us that the law of nature is able to create very beautiful and internally structured shapes from chaos in spite of the turbulent environment in which they are created”.

In this research work, which has taken six years, they have fully revealed the mechanisms for the formation of iberulites (annotating the maximum and minimum size); on the other hand, they could be useful as environmental or paleoclimatic markers, or to change the models of radioactive transference in the atmosphere. They should even be considered in the processes which form the Mediterranean soil, as the yearly rate of incorporation of dust to the soil of this area is about 23 grams per square metre a year. “This could be another of the reasons why certain Mediterranean soils are very different to other soils around the world”, the authors explain.

Finally, the scientists conclude their work stating that the iberulites “are the tangible evidence of the hydrodynamic theory applied to the interactions of water drops and dust particles, which give raise to morphologies with a vortex, which had been confined and explained up to now in laboratory studies.”

This discovery has been recently published in Geochimica et Cosmochimica Acta.