Is The Trichoplax Genome A 'Rosetta Stone' For Understanding Evolution?
By News Staff | September 3rd 2008 12:00 AM | Print | E-mail

Yale molecular and evolutionary biologists in collaboration with Department of Energy scientists produced the full genome sequence of Trichoplax, one of nature's most primitive multicellular organisms, providing a new insight into the evolution of all higher animals.

The findings reported in Nature show that while Trichoplax has one of the smallest nuclear genomes found in a multi-cellular creature, it contains signature sequences for gene regulation found in more complex animals and humans. Further, it defines Trichoplax as a branching point of animal evolution. 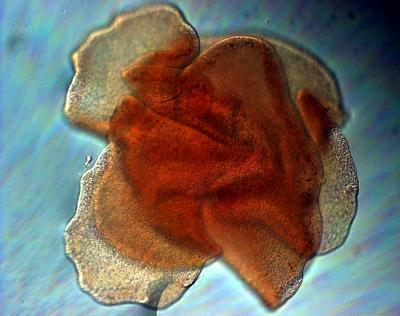 "Trichoplax placozoans are animals that have only four body cell types and no structured organs. They represent descendents of the oldest multi-celled animal, perhaps older even than sponges," said author Stephen Dellaporta, professor of molecular, cellular and developmental biology at Yale.

This study shows that compared with the nuclear genome of humans that contains 3 billion base pairs, Trichoplax has only 98 million. Earlier sequencing work showed that the mitochondrial genome of Trichoplax is over twice the size of those found in most animals with genes, introns and spacer sequences like the most primitive organisms.

However, size is not all that matters. DNA sequences that organisms share in common represents what was in their genomes at the time of their divergence. Unlike other model systems for studying evolution, including fruit flies and worms, even the arrangement of genes is conserved between the Trichoplax and human genomes.

"Trichoplax shares over 80 percent of its genes with humans," said Dellaporta. "We are exited to find that Trichoplax contains shared pathways and defined regulatory sequences that link these most primitive ancestors to higher animal species. The Trichoplax genome will serve as a type of "Rosetta Stone" for understanding the origins of animal-specific pathways."