News Staff
A new analysis confirms what we already knew - the evolutionary relationships among animals are not simple and the traditional idea that animal evolution has followed a trajectory from simple to complex—from sponge to chordate—had met a dramatic exception in the metazoan tree of life.

But the new study suggests that the so-called "lower" metazoans (including Placozoa, corals, and jellyfish) evolved in parallel to "higher" animals (all other metazoans, from flatworms to chordates).  They say that means Placozoans—large amoeba-shaped, multi-cellular animals—have passed over sponges and other organisms as an animal that most closely mirrors the root of this tree of life.

Placozoans were discovered just over 100 years ago, gliding along the glass in laboratory aquariums. Placozoans are simple animals that lack a nervous system and have only four kinds of somatic cells. Because they have never been studied in their oceanic home, however, further characterization of this group has been problematic. The genome of the placozoan species Trichoplax adharens was sequenced in the middle of 2008 by the Trichoplax Genome Consortium team, which was initiated by first author Bernd Schierwater, Director of ITZ, Ecology and Evolution, Tierärztliche Hochschule Hannover in Germany and a research associate at the Museum.

"To make inferences about the origin of Bilaterians—animals with a bilateral symmetry, like humans—earlier studies suggested sponges, ctenophores (comb jellies), or a small, interesting group called Placozoa as the most basal or primitive animal," says senior author Rob DeSalle, Curator at the Sackler Institute for Comparative Genomics at the American Museum of Natural History. "But our new analysis implies that the first major event in animal evolution split bilateral animals from all others, and our work firmly places Placozoa as the most primitive of the nonbilaterian animals."


Maximum Likelihood Phylogenetic Tree of Metazoan Relationships Using the Concatenated Data Matrix .  Node support is based on the best ML tree filtered through 1,000 rapid bootstrap replicates. Only support values below 100% are shown. Bayesian inference supported strongly (posterior probability = 1.0) all nodes with the exception of monophyly of Cnidaria. The maximum a posteriori and the Bayesian 50% majority-rule consensus trees disagreed with the best ML tree in supporting a Ctenophora–Anthozoa clade with posterior probability of 0.98. Please note that “Coelenterata” is not a taxonomic unit, but rather it is a traditional grouping for reasons of convenience. The alpha shape parameters of the Gamma distribution were 0.507454 and 0.651659 for the nucleotide and amino acid partitions, respectively. Log-likelihood = −261429.821426.  From: Concatenated Analysis Sheds Light on Early Metazoan Evolution and Fuels a Modern “Urmetazoon” Hypothesis Schierwater B, Eitel M, Jakob W, Osigus HJ, Hadrys H, et al. PLoS Biology Vol. 7, No. 1, e20 doi:10.1371/

While several previous studies placed Placozoans at the base of the animal tree of life, these results attracted little attention. The current research may provide the final word, since the number of traits considered was very large and the resulting phylogeny was supported very strongly. Researchers lumped data from many different sources, including mitochondrial and nuclear DNA sequences and information about the morphological structure of RNA molecules, to find over 9,400 variable characters that contain parsimony information—the shared, derived traits that help biologists infer the tree of life, or phylogeny.

The phylogeny drawn from the new analysis places Placozoans as basal within the Diptoblasta, a group of animals that includes sponges, comb jellies, jellyfish, corals, and anemones. This means that sponges and comb jellies, both previously considered candidates for the most basal animal, fall within the clade as more derived than Placozoans and as sister taxa to each other. 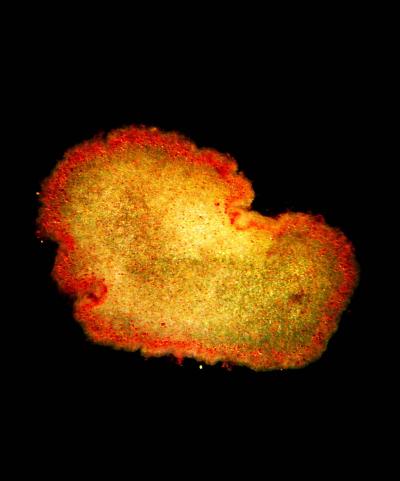 Study results also identify a very deep division between the Diptoblasta and the Bilateria/Triploblasta: when looking at all animals, scientists now see that Placozoans and their relatives are in a separate lineage from all other metazoans (starfish, bivalves, anthropoids, crustaceans and chordates). This means that the nervous system, once thought to have arisen once, must have evolved twice from the DNA that coded for these complex systems (keeping in mind that while Placozoans and sponges do not have nervous systems, many of the taxa related to them do.)


"Some people might initially be shocked to see that nerve cells in cnidarians and higher animals (Bilateria), the group of animals that includes humans, evolved independently," says Schierwater. "But with this new phylogeny, we can take a closer look at the anatomy of these organisms—and we can see that their nervous systems are not all that similar at the morphological level after all."

DeSalle agrees. "It is the underlying genetic tool kit that is similar amongst these basal animals. Placozoa have all of the tools in their genome to make a nervous system, but they just don't do it."