New research by Professor Michael Benton and our own Sarda Sahney at the University of Bristol indicate in a Proceedings of the Royal Society B paper that specialized animals forming complex ecosystems, with high biodiversity, complex food webs and a variety of niches, took over 30 million years to recover from the last major extinction.

About 250 million years ago, at the end of the Permian period, a major extinction event killed over 90 per cent of life on earth, including insects, plants, marine animals, amphibians, and reptiles. Ecosystems were destroyed worldwide, communities were restructured and organisms were left struggling to recover. This was the nearest life ever came to being completely wiped out.

Previous work indicates that life bounced back quite quickly, but this was mostly in the form of ‘disaster taxa’ (opportunistic organisms that filled the empty ecospace left behind by the extinction), such as the hardy Lystrosaurus, a barrel-chested herbivorous animal, about the size of a pig. 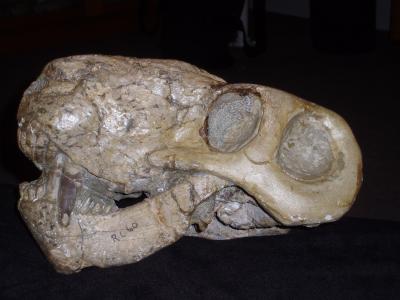 The sabre-toothed Lycaenops was a top predator of the latest Permian in South Africa. Lycaenops was a gorgonopsian, one of a group of highly successful animals that dominated faunas in the Late Permian, but were wiped out, together with 90 per cent of all species, by the end-Permian mass extinction. Credit: Mike Benton, University of Bristol

Sahney said: “Our research shows that after a major ecological crisis, recovery takes a very long time. So although we have not yet witnessed anything like the level of the extinction that occurred at the end of the Permian, we should nevertheless bear in mind that ecosystems take a very long time to fully recover.”

Sahney and Benton looked at the recovery of tetrapods – animals with a backbone and four legs, such as amphibians and reptiles – and found that although globally tetrapods appeared to recover quickly, the dramatic restructuring that occurred at the community level was not permanent and communities did not recover numerically or ecologically until about 30 million years later.

Professor Benton explained: “Diversity is most commonly assessed by tallying the number of taxa on a global scale, but these studies are subject to the vagaries of sampling. By examining well-preserved and well-studied faunas, the taxonomic and ecological recovery of communities after the Permian extinction event can be examined more accurately, and the problems of geological bias are largely avoided.”

The Permian extinctions occurred in three waves, the largest being at the boundary between the Permian and Triassic periods, 251 million years ago. This was the most devastating ecological event of all time, thought to be caused by large-scale volcanism in Russia which produced the ‘Siberian Traps’, covering over 200,000 square kilometers (77,000 square miles) in lava.