News Staff
Fossil "swim tracks," a type of vertebrate trace fossil gaining recognition in the field of paleontology, is  made by various tetrapods (four-footed land-living vertebrates) as they traveled through water under buoyant or semibuoyant conditions.

They occur in high numbers in deposits from the Early Triassic,  between the Permian and Jurassic 250 to 200 million years ago. Major extinction events mark the start and end of the Triassic but it is a but of a mystery why tracks from the period are so abundant and well preserved. 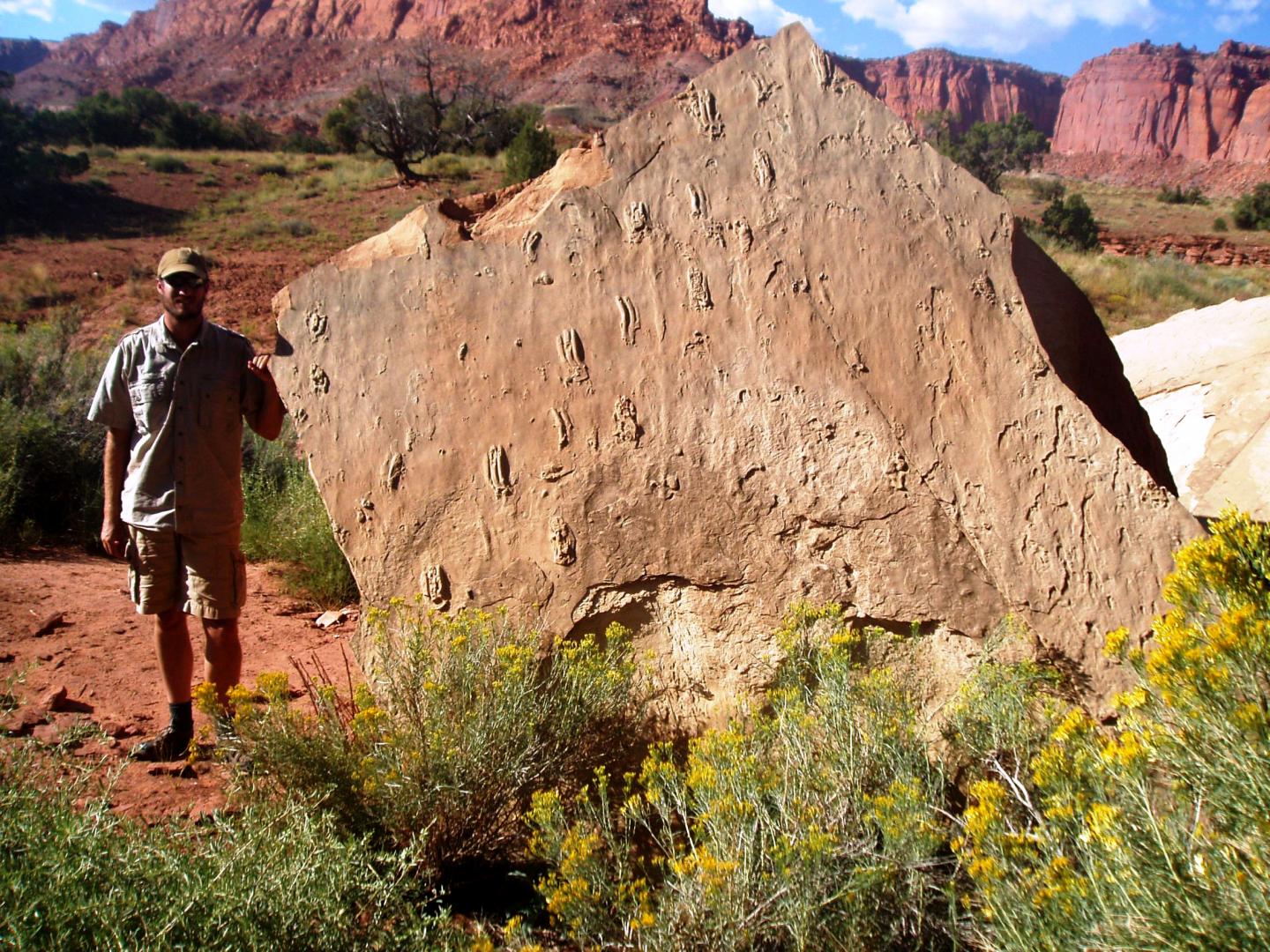 Paleontologists at the University of California, Riverside have now determined that a unique combination of factors in Early Triassic delta systems resulted in the production and unusually widespread preservation of the swim tracks: delayed ecologic recovery, depositional environments, and tetrapod swimming behavior.

"Given their great abundance in Lower Triassic strata, swim tracks have the potential to provide a wealth of information regarding environmental exploitation by reptiles during this critical time in their evolution following the end-Permian mass extinction," said Mary L. Droser, a professor of paleontology in the Department of Earth Sciences, who led the research. "They also provide important data for our interpretation of Early Triassic sedimentological and stratigraphic processes.  The Early Triassic period follows the largest mass extinction event in Earth's history. The fossil record shows that a prolonged period of delayed ecologic recovery persisted throughout the Early Triassic."

She explained that the fossil swim tracks are important and unique records of the aquatic behaviors and locomotion mechanics of tetrapods, and reveal a hidden biodiversity. They also constitute an excellent natural laboratory for investigating the paleoenvironmental and paleoecological conditions associated with their production and preservation.

Droser and Tracy J. Thomson, her former graduate student, surveyed the temporal distribution of the swim tracks seen in fossils in Utah, and report online this month, ahead of print, in the journal Geology that it is not the tetrapod swimming behavior alone, but the prevalence of unbioturbated substrates resulting from the unique combination of ecological and environmental conditions during the Early Triassic that led to the abundant production and preservation of swim tracks.

They identify three interacting factors that composed a "Goldilocks" effect in promoting the production and preservation of Lower Triassic swim tracks. These factors were (1) ecological, i.e., delayed ecologic recovery resulting in the lack of well-mixed sediment, (2) paleoenvironmental, i.e., depositional environments that promoted the production of firmground substrates, and (3) behavioral, i.e., the presence of tetrapods capable of aquatic locomotion such as swimming or bottom walking.

"During the Early Triassic, sediment mixing by animals living within the substrate was minimal," said Thomson, the first author of the research paper who is now pursuing a doctoral degree at UC Davis. "This strongly contributed to the widespread production of firm-ground substrates that are ideal for recording and preserving trace fossils like swim tracks."

Thomson explained that the end-Permian mass extinction event resulted in ecologic restructuring of both the marine and terrestrial realms. Bioturbation was suppressed, resulting in no extensively mixed sediment layer, thereby allowing fine-grained, low-water-content firmgrounds to develop near the sediment-water interface.

"Early Triassic deltas and their paleoenvironments were favorable habitats for functionally amphibious reptiles," Droser said. "There were few animals living in the sediment mixing it up after the extinction, and so the muds became firm and cohesive providing ideal conditions for preservation. Periodic flooding supplied coarser grained material, enhancing swim track preservation."