Some of the world’s rarest and most precious metals, including platinum and iridium, could owe their presence in the Earth’s crust to iron and stony-iron meteorites, fragments of a large number of asteroids that underwent significant geological processing in the early Solar System.

Dr Gerhard Schmidt from the University of Mainz, Germany, has calculated that about 160 metallic asteroids of about 20 kilometres in diameter would be sufficient to provide the concentrations of these metals, known as Highly Siderophile Elements (HSE), found in the Earth’s crust. Dr Schmidt will be presenting his findings at the European Planetary Science Congress in Münster on Monday 22nd September. 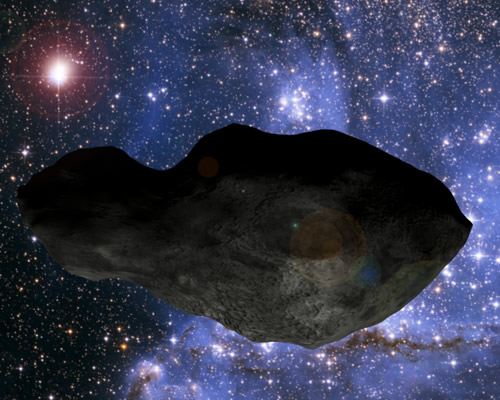 Artist rendition provides image of asteroid Kleopatra, a type of asteroid that a future mission could target for further study of the solar system.

Dr Schmidt said, “A key issue for understanding the origin of planets is the knowledge of the abundances of HSE in the crust and mantle of the Earth, Mars and the Moon. We have found remarkably uniform abundance distributions of HSE in our samples of the Earth’s upper crust. A comparison of these HSE values with meteorites strongly suggests that they have a cosmochemical source.”

Although HSE were present in the nebula from which the Earth formed, as the young planet evolved and heated up they were stripped, along with other heavy elements, from the silicate mantle into the iron and nickel-rich metallic core. The presence of HSE in the mantle is still a matter of debate.

However, a widely accepted theory is that HSE were added by meteorite impacts as a veneer of material over the Earth’s surface after the core had formed, about 20-30 million years after the planet’s accretion. This could have been by the collision with a Mars-sized impactor that led to the formation of the Moon. Different classes of meteorites have characteristic elemental ratios of HSE that give indications where in the Solar System they formed.

However, the characteristic ratios of HSEs in the Earth’s upper mantle (for example the ruthenium/iridium element ratio of about 2) match up with theoretical predictions for asteroids formed in the Mercury-Venus region.

The Earth is a differentiated body, with a iron-nickel core, a silicate mantle, and evolved silicate crust. Dr Schmidt’s study shows that the abundance ratios of HSE in the Earth’s crust are much higher than those found in stony meteorites, known as chondrites, which represent the pristine material from the early Solar System. The ratios of HSE found in the crust bear a much closer resemblance to iron or stony-iron meteorites.

These are fragments of larger asteroids that have had enough internal heat in the past to form a molten metal core. The HSE concentrate preferentially in the liquid core and at the boundary with the solid, rocky envelope. However, the exact ratios of the different metals depend on the physical conditions under which they were formed.

The ratios of HSE found in the Earth’s upper mantle do not exactly match any specimens of meteorites found in collections around the world. Close to the mantle highly siderophile element ratios are data from the iron meteorite Charlotte.

Dr Schmidt said “The first meteorite to be found on Mars was an iron meteorite, discovered by the Opportunity rover in January 2005. Analysis of the Nahkla, Shergotty and Zagami Martian meteorites strongly supports a genetic link with certain iron meteorites and pallasites.”