News Staff
A University of Michigan professor has created 3-D portraits of the president-elect that are smaller than a grain of salt. He calls them "nanobamas."

John Hart, an assistant professor in the Department of Mechanical Engineering, made the mini-Barack Obama 'Nanobama' likenesses with his colleagues to raise awareness of nanotechnology and science.   Plus, Obama flowed much nicer with 'nano' than  McCain would have.   And Hart voted for Obama, not that you didn't think so already.

Each one contains about 150 million carbon nanotubes stacked vertically like trees in a forest. A carbon nanotube is an extraordinarily strong hollow cylinder about 1/50,000th the width of a human hair.

"Developments like this are an excellent way to bring the concepts of nanotechnology to a broader audience," said Hart, who made the portraits with his colleagues by working late on a Friday evening. "Also, we thought it would be fun." 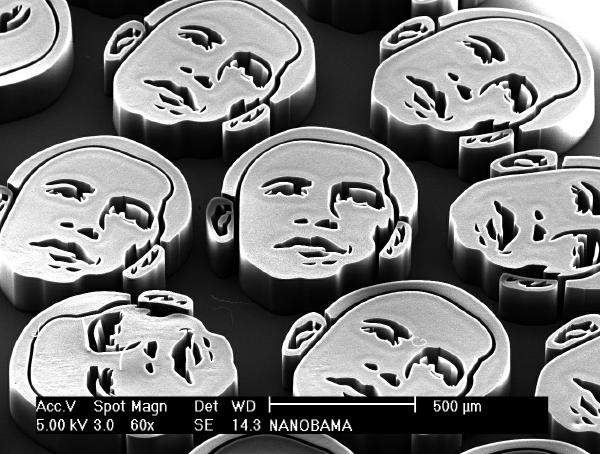 Carbon nanotubes could be used in solar cells and batteries, new methods of diagnosing and treating disease, next-generation computer processors and memory, and stronger lightweight materials. Hart's Mechanosynthesis Group focuses on studying how to make nanostructures like nanotubes, and how to use these small-scale building blocks in electronics, energy devices and high-performance materials.

To create the nanobamas, the researchers converted Shepard Fairey's famous red, white and blue poster of Barack Obama to a line drawing. They shrunk it and printed it on a glass plate with a laser to create a mask. They shined ultraviolet light through the masked glass plate on to a silicon wafer to create the pattern. Then they grew the carbon nanotubes on the pattern, using a high-temperature chemical reaction.

The researchers photographed the nanobamas with an electron microscope. The faces are half a millimeter in size.

Nanobama is Hart's latest artwork too small for the naked eye to see. His complete gallery is at nanobliss.com, a site he started in 2006, inspired by the beauty in the structures he was building for his dissertation. Hart has used this technique to make Michigan logos, snowflakes and a mock Absolut Nano ad that shows nanotubes grown in the shape of a vodka bottle.