News Staff
Even 150 years after Charles Darwin’s epochal On the Origin of Species many questions about the molecular basis of evolution are still waiting for answers.

How are signaling pathways changed by genes and by the environment enabling the development of new species?

A group of scientists at the Max Planck Institute for Developmental Biology in Tübingen, Germany, are striving to decode the molecular basis of parasitism and their objects of research are nematode worms. Do the dauer stages which occur in certain nematodes and the infective larvae of their parasitic cousins share a common evolutionary basis? 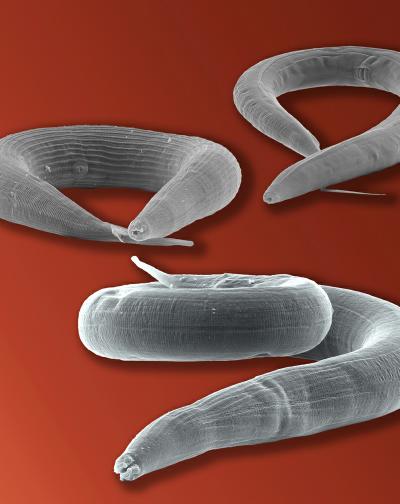 Analyzing the chemical signaling pathways the Tübingen scientists detected an evolutionarily conserved module which controls the fate of the worm larvae. Thus they found the first indication that infective larvae originally evolved from dauer larvae .

Pheromones signal deterioration of environmental conditions such as crowding caused by a large increase of the population, unfavorable temperatures or lack of food to larvae of the small nematode Caenorhabditis elegans. These signals are processed in the organism via multiple information pathways. In the end, they result in the development of the so-called dauer stage, a kind of developmental arrest of the worm before adulthood. C. elegans thus secures its survival: an active adult worm develops from this dauer stage only after the environmental conditions have become favorable again.

Because dauer larvae attach to other animals and are thus dispersed, many scientists see this as a first step towards parasitism. Indeed, parasitic nematodes invade their hosts as infective larvae, a stage with striking morphological similarities to the dauer stage of C. elegans. The details of the signaling pathways regulating the differentiation of the cells are well studied in C. elegans, but up to now there was no indication for the common origin of dauer larvae and infective larvae.

In order to identify potential conserved – i.e. unchanged in the course of evolution – signaling pathways, the research group of Ralf Sommer at the Max Planck Institute for Developmental Biology in Tübingen (Germany) examined a close relative of C. elegans, a nematode called Pristionchus pacificus. In the evolution of nematodes it represents an intermediate between C. elegans and the parasitic species of this phylum.

In the wild, Pristionchus dauer larvae associate with beetles and resume development only after the beetle’s death. They then feed on microbes developing on the decaying carcass of the beetle. Scientists call this phenomenon necromeny. The dauer form is thus an essential adaptation to the ecological niche of this nematode.

In order to find out how far evolutionarily-conserved mechanisms are involved in the formation of dauer larvae, the authors first determined whether pheromones control the formation of dauer larvae also in Pristionchus. They found that this was in fact the case. However, the pheromones involved are not the same as those present in C. elegans, although further studies showed that P. pacificus does use the same chemical mediators in response to these pheromones. The induction of the dauer stage is dependent on the production of two steroid hormones (?4-dafachronic acid and ?7-dafachronic acid) which change the binding status of the respective hormone receptor (DAF-12). Obviously, this is a conserved hormonal-endocrine module which – according to the results of the Tübingen scientists – is also present in at least one parasitic representative of the nematodes, in Strongyloides papillosus. This nematode parasitizes cattle and sheep.

The gradual evolution of parasitism has its origin in phenotypic plasticity, “thereby enabling the retention of a bacteria-feeding free-living life cycle as in C. elegans while already shaping an alternative feeding strategy as in Pristionchus” according to the evolutionary biologist.