An international team of scientists have sequenced the genome for Physcomitrella – the first non-flowering or ‘lower’ plant to be sequenced – and published their findings in the latest issue of Science.

The moss Physcomitrella patens is a primitive plant, similar to the first plants which began to grow on land around 450 million years ago. Just one cell thick, these early plants had to adapt to withstand cold, heat and drought without roots or complex leaves. The ability of mosses to survive severe dehydration and then regrow when watered could be of enormous use in crops grown in drought-stricken areas of the developing world. 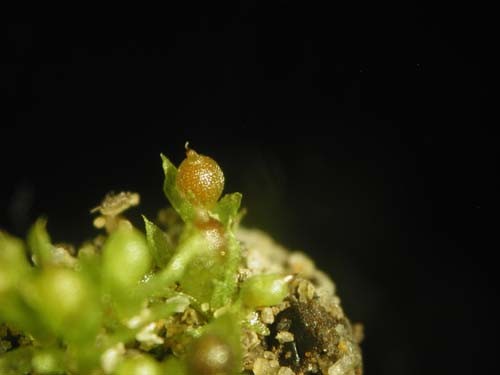 The spore capsule of Physcomitrella. This is actually the diploid phase of the life cycle, which is very restricted in mosses

Now that they have sequenced the moss’s DNA, scientists will be able to identify which genes control these survival tactics and adapt crops to do the same.

The study of Physcomitrella was started at the University of Leeds over 20 years ago by Professor David Cove. Dr Andy Cuming has continued Professor Cove’s work, supported by the Biotechnology and Biological Sciences Research Council, and is part of the international team working on the genome.

“Physcomitrella is a really useful plant to study,” explains Dr Cuming. “In addition to being the link between water-based algae and land plants, it also has many important characteristics which make it special. By sequencing the genome, we can start to identify their genetic basis and use the knowledge for crop improvement.”

Physcomitrella has a single ‘haploid’ genome – rather than a double genome from male and female parents – which makes it easier to identify which characteristics link to which gene. The moss is also able to integrate new DNA into a defined target in the genome – unlike most plants which integrate new DNA randomly. This means that modification of the moss genome is far more controlled than with other plants and allows the moss to be adapted as a ‘green factory’ to produce pharmaceutical products.

“If we can discover what mechanisms cause the Physcomitrella genome to integrate DNA in this way – we may be able to transfer those to other plants, to allow more controlled modification of their genomes,” said Dr Cuming. “However, we also believe many of the useful genes in Physcomitrella are probably still present in ‘higher’ crop plants, but are no longer active in the same way. So rather than adding new DNA – we’ll just be activating what’s already there to create the properties we want.”

“Until now, only a handful of flowering plant genomes have been sequenced, compared with a large number of diverse animal genomes,” says Dr Cuming. “But knowledge of a range of genomes is really important for scientific study. To help in understanding the human genome, scientists use the DNA of fruit flies, nematode worms and mice, to name only a few. We need that range in plant sciences too – and Physcomitrella patens is a fantastic one to add to the list.”

Article: ‘The Physcomitrella genome reveals insights into the conquest of land by plants’, Science, 13 December 2007