Biologists and biochemists are now able to access 3-D images of biomacromolecules underlying biological functions and disease, thanks to a collaborative website called Proteopedia which provides a new resource by linking written information and three-dimensional structural information.

Rather than relying just on text to provide the understanding of biomacromolecule structures, this wiki web resource, first described in Genome Biology, displays protein structures and other biomacromolecules in interactive format. These interactive images are surrounded by descriptive text containing hyperlinks that change the appearance (such as view, representations, colors or labels) of the adjacent 3D structure to reflect the concept explained in the text.

This makes the complex structural information readily accessible and comprehensible, even to people who are not structural biologists. 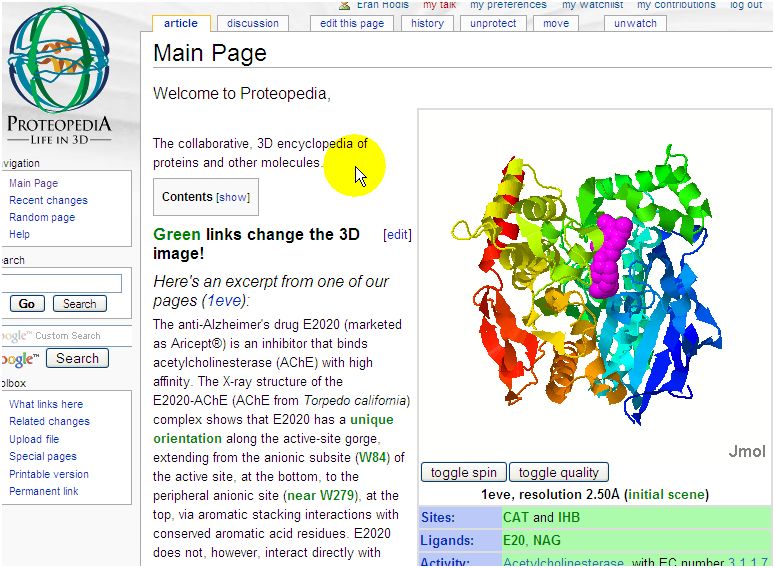 Proteopedia is freely accessible to the public and Proteopedia pages can be created and edited by registered users. To provide additional incentive for giving editing pages a try, Proteopedia is holding a “Page of the Year” competition with an Apple iPod Touch (32GB) as the grand prize, donated by Apple's representative in Israel, iDigital.

Prilusky is Head of the Bioinformatics Unit at the Israel Structural Proteomics Center (http://www.weizmann.ac.il/ISPC). Hodis is a graduate student at the Feinberg Graduate School of the Weizmann Institute of Science. Sussman is former Head of the Protein Data Bank.

Aside from content added by Proteopedia's existing users, pages on each of the more than 50,000 entries in the Protein Data Bank have been automatically created with ’seed‘ information, creating pages that are already useful and primed for expansion by users. Members of the scientific community are invited to request a user account to edit existing pages and to create new ones.

Hodis says, “We are presenting Proteopedia to the scientific community to judge its usefulness and merit, and we truly hope that it will offer an effective and appealing way to convey the link between 3D structure and function.”