News Staff
Illustrating the power of submillimetre-wavelength astronomy, an APEX image reveals how an expanding bubble of ionised gas about ten light-years across is causing the surrounding material to collapse into dense clumps that are the birthplaces of new stars. Submillimetre light is the key to revealing some of the coldest material in the Universe, such as these cold, dense clouds.

The region, called RCW120, is about 4200 light years from Earth, towards the constellation of Scorpius. A hot, massive star in its centre is emitting huge amounts of ultraviolet radiation, which ionises the surrounding gas, stripping the electrons from hydrogen atoms and producing the characteristic red glow of so-called H-alpha emission.

As this ionized region expands into space, the associated shock wave sweeps up a layer of the surrounding cold interstellar gas and cosmic dust. This layer becomes unstable and collapses under its own gravity into dense clumps, forming cold, dense clouds of hydrogen where new stars are born. However, as the clouds are still very cold, with temperatures of around -250˚ Celsius, their faint heat glow can only be seen at submillimetre wavelengths. Submillimetre light is therefore vital in studying the earliest stages of the birth and life of stars. 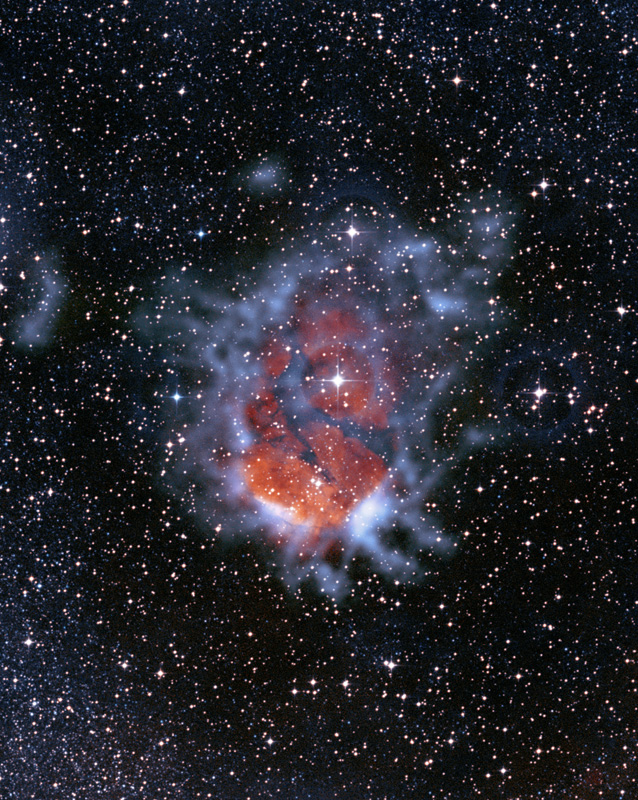 CLICK ABOVE FOR FULL SIZE. Color composite image of RCW120. It reveals how an expanding bubble of ionised gas about ten light-years across is causing the surrounding material to collapse into dense clumps where new stars are then formed. The submillimetre-wavelength data were taken with the LABOCA camera on the 12-m Atacama Pathfinder Experiment (APEX) telescope. Here, the submillimetre emission is shown as the blue clouds surrounding the reddish glow of the ionised gas (shown with data from the SuperCosmos H-alpha survey). The image also contains data from the Second Generation Digitized Sky Survey (I-band shown in blue, R-band shown in red). Credit: ESO/APEX/DSS2/SuperCosmos

The submillimetre-wavelength data were taken with the LABOCA camera on the 12-m Atacama Pathfinder Experiment (APEX) telescope, located on the 5000 m high plateau of Chajnantor in the Chilean Atacama desert. Thanks to LABOCA's high sensitivity, astronomers were able to detect clumps of cold gas four times fainter than previously possible. Since the brightness of the clumps is a measure of their mass, this also means that astronomers can now study the formation of less massive stars than they could before.

The plateau of Chajnantor is also where ESO, together with international partners, is building a next generation submillimetre telescope, ALMA, the Atacama Large Millimeter/submillimeter Array. ALMA will use over sixty 12-m antennas, linked together over distances of more than 16 km, to form a single, giant telescope.

APEX is a collaboration between the Max-Planck-Institute for Radio Astronomy (MPIfR), the Onsala Space Observatory (OSO) and ESO. The telescope is based on a prototype antenna constructed for the ALMA project. Operation of APEX at Chajnantor is entrusted to ESO.
News Articles
More Articles All Articles
About