News Staff
Stradivarius and his violins are so eponymous in our culture that they have become a benchmark for quality - and the mystery of why they sound so good has baffled competitors for centuries.   After 33 years of work, a Texas A&M University professor is confident he knows the secret - chemistry.

Joseph Nagyvary, a professor emeritus of biochemistry, first theorized in 1976 that chemicals used on the instruments – not merely the wood and the construction – are responsible for the distinctive sound of these violins. He says his controversial theory has now received definitive experimental support through collaboration with Renald Guillemette, director of the electron microprobe laboratory in the Department of Geology and Geophysics, and Clifford Spiegelman, professor of statistics, both Texas A&M faculty members. Their study is in PloSONE.

Nagyvary obtained minute wood samples from restorers working on Stradivarius and Guarneri instruments ("no easy trick and it took a lot of begging to get them," he adds). The results of the preliminary analysis of these samples, published in "Nature" in 2006, suggested that the wood was brutally treated by some unidentified chemicals. For the present study, the researchers burned the wood slivers to ash, the only way to obtain accurate readings for the chemical elements. 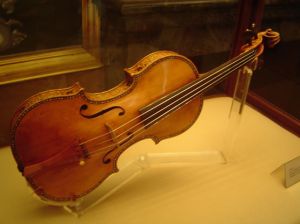 They found numerous chemicals in the wood, among them borax, fluorides, chromium and iron salts.

"Borax has a long history as a preservative, going back to the ancient Egyptians, who used it in mummification and later as an insecticide," Nagyvary adds.

"The presence of these chemicals all points to collaboration between the violin makers and the local drugstore and druggist at the time. Their probable intent was to treat the wood for preservation purposes. Both Stradivari and Guarneri would have wanted to treat their violins to prevent worms from eating away the wood because worm infestations were very widespread at that time."

Antonio Stradivari (1644 – 1737) made about 1,200 violins in his lifetime and sold them only to the very rich, primarily the royalty. Today, there are about 600 Stradivarius violins remaining and they are valued at up to $5 million each.

A lesser-known contemporary of Stradivari, Guarneri del Gesu, like the painter van Gogh, had trouble selling his work, but his instruments are now considered equal in quality and price by experts to Stradivarius violins.

Nagyvary, a native of Hungary who learned to play the violin by using an instrument that once belonged to Albert Einstein, has wondered for decades how Stradivari, with his rudimentary education and no scientific training, could have produced musical instruments with such an unequaled sound.

"These current research results are highly gratifying for me because they prove what I first proposed 33 years ago, that – contrary to common wisdom – the wood of the great masters was not natural (unadulterated) but chemically treated by certain minerals, some of which I had predicted at the outset. Based on my lifetime experimentations with similar chemicals, we have reason to believe that they could have played a major role in the great tonal refinement of the antique instruments," Nagyvary says.

"When you use science to prove a point, it often de-mystifies the glory of the legendary masters, and for that reason, there has been some reluctance to get to the truth. To have undeniable scientific proof that supports my work is very satisfying, to say the least."

Nagyvary said he believes the current findings will be of great interest to art historians and musical instrument makers around the world and could change the process of how fine violins are made.

For more about his work, go to www.nagyvaryviolins.com.
News Articles
More Articles All Articles
About