A research team from the University of the Basque Country, led by Basilio Sierra, is devising a robot that can identify different locations and will even ask permission before going through a doorway.

Let's face it, robots are boring. They never came close to cleaning our houses or delving into Asimovian angst about their existence.

A robot that can walk around without having every move programmed and can make decisions for itself is a start. The Autonomous Robotics and Systems Research Team at the University of the Basque Country (UPV/EHU) are involved in increasing the autonomy of robots so that they are evermore capable of carrying out more tasks on their own. They started with Marisorgin, the robot for distributing mail, and are making further advances with Tartalo. 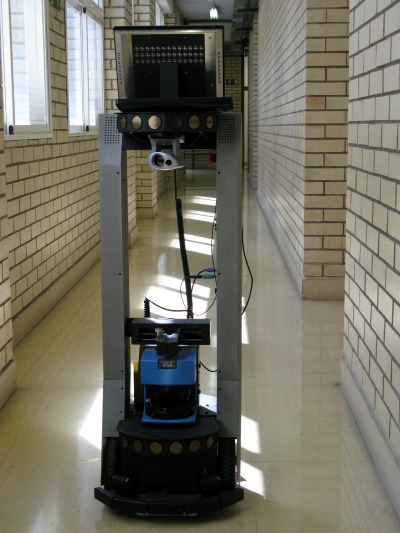 Tartalo the robot. Do you get the feeling the Japanese are going to make a lot sexier robots than this? Photograph: Alaitz Ochoa de Eribe
If you go the third floor of the Computer Science Faculty in the Basque city of Donostia-San Sebastián you may meet Tartalo in the corridors but you won't bump into him.

The 1.5-meter tall, intelligent machine side-steps any obstacle in its path, thanks to sensors around its “body”: sonars that emit and detect ultrasounds, infrared sensors and laser rays. The laser, for example, measures the distance of the robot from any object within a radius of 180 degrees.

With these sensors and the computer that is the robot’s ‘brain’, Tartalo will have the wherewithal to move from one place to another without problems; in fact, to wander. What the research team at the Department of Computational Sciences and Artificial Intelligence want to achieve, however, is a robot capable of going anywhere it is told to.

The machines best known for guiding one from a starting point to a given goal are GPS navigation systems. However, these do not function inside buildings and neither would it be realistic to create a database with the plans for every building in the world.

For this reason the UPV/EHU researchers use biomimetic systems as a basis for developing the robot, meaning that Tartalo does the same as a person or animal on entering a new place: explore the terrain and take in points of reference. But, for a machine to carry out what living creatures do by, as it were, instinct, the computer programmers have to nevertheless put in a huge quantity of data, programmes and calculations.

Buildings are semi-structured environments wherein determined common spaces are always found. Tartalo has been “taught” (programmed) to recognise four of these: room, corridor, front hall and “junction”. Thus, if we were to take the robot to our home, the first thing it would have to do is to carry out a process of auto-location, going around the apartment in order to memorise the location of these four places.

By this process the machine creates a species of topological map and the homeowner only has to teach it what each space is called. For this to be possible, UPV/EHU researchers are designing systems of interaction between machine and persons.

For example, in order for the robot to understand instructions, they are perfecting a voice recognition system and touch screen.

In order to identify what is in front, to distinguish between a room and a corridor, for example, Tartalo uses this single eye - which gives it its name – as a camera. It measures the images received through the eye-camera, compares them with its database and then evaluates probabilities to decide what the image that it has ahead looks like. The robot knows, for example, that if the space is long and narrow, it is a corridor.

The most important skill that Tartalo has been taught is to recognize doors. In fact, in order to access most of the places instructed to do so, the robot will have to pass through a doorway first. This is why the camera is located at the level of the doorknob or handle, which is what enables the identification of the door. When this happens, the system is programmed so that, when moving down a corridor, it seeks and negotiates doorways. If the door is closed, as it is not yet fitted with an arm to open it, it knocks two or three times on the door with its “feet.”

The aim of the UPV/EHU research team is to develop the navigation system of the robot and the recognition of doors is fundamental to this end. From now on, Tartalo will have to learn to distinguish between many other things, such as faces, voices or any object that it is asked to fetch.

But each one of these actions requires a specific programme and this, for the time being, is outside the remit of the research being undertaken by the UPV/EHU Autonomous Robotics and Systems Research Team. Nevertheless, little by little the skills developed by other teams will be incorporated into this robot.