A protein that the heart produces during its early development reactivates the embryonic coronary developmental program and initiates migration of heart cells and blood vessel growth after a heart attack, researchers at UT Southwestern Medical Center have found.

The molecule, Thymosin beta-4 (TB4), is expressed by embryos during the heart's development and encourages migration of heart cells. The new findings in mice suggest that introducing TB4 systemically after a heart attack encourages new growth and repair of heart cells. The research findings indicate that the molecule affects developmental gene expression as early as 24 hours after systemic injection. The study will appear in an upcoming issue of the Journal of Molecular and Cellular Cardiology.

"This molecule has the potential to reprogram cells in the body to get them to do what you want them to do," said Dr. J. Michael DiMaio, associate professor of cardiothoracic surgery at UT Southwestern and senior author of the study. Obviously, the clinical implications of this are enormous because of the potential to reverse damage inflicted on heart cells after a heart attack."

Tremendous medical progress has been made to counter the damaging effects of heart attacks, but ordinarily, mammalian hearts are incapable of repairing themselves following damage. They are also limited in their ability to form new blood vessels. Earlier studies demonstrated that TB4 is expressed in the embryonic heart and stimulates cardiac vessels to form. It was therefore thought that introduction of TB4 might activate new vessel growth in the adult heart. 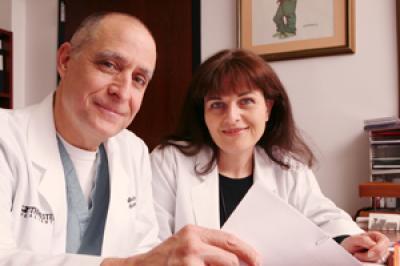 In this mouse study researchers found that TB4 initiates capillary tube formation of adult coronary endothelial cells in tissue culture. The molecule also encourages cardiac regeneration by inhibiting death in heart cells after an injury such as a heart attack and by stimulating new vessel growth.

"We observed that by injecting this protein systemically, there was increased cardiac function after a heart attack," said Dr. Ildiko Bock-Marquette, assistant professor of cardiothoracic surgery at UT Southwestern and the study's lead author. "We hope this protein can inhibit cell death that occurs during a heart attack in the short term, and that it may initiate new growth of coronary vessels by activating progenitor cells in the long term."

Researchers assessed the effect of TB4 on new vessel growth in adult mice after inducing heart attacks and then following up by introducing TB4 into the animals. An examination of the capillary smooth muscle cells following treatment with TB4 showed a significant increase in capillary density in the heart three days afterward near the site of the heart attack, the scientists reported.

Further studies will examine whether the same events occur in larger mammals and which receptors are responsible for the action of this molecule.

The work was supported by the Ted Nash Long Life Foundation, the American Heart Association, and the National Institutes of Health.