Scientists have confirmed the second-ever case of a 'virgin birth' in a shark, further confirming that female sharks can reproduce without mating and that many female sharks may have this incredible capacity.

Lead author Dr. Demian Chapman, shark scientist with the Institute for Ocean Conservation Science at Stony Brook University, Beth Firchau of the Virginia Aquarium & Marine Science Center, and Dr. Mahmood Shivji, Director of the Guy Harvey Research Institute and Professor at Nova Southeastern University in Florida, have proven through DNA testing that the offspring of a female blacktip shark named 'Tidbit' contained no genetic material from a father. 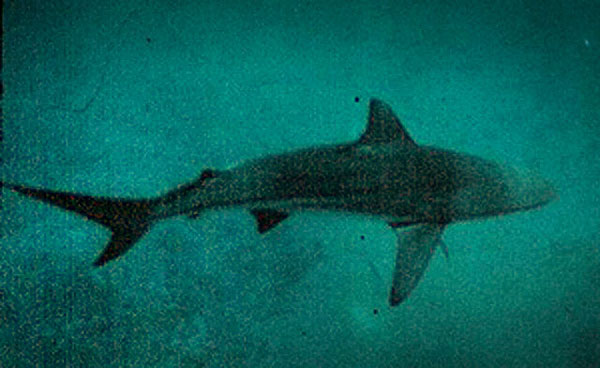 The phenomenon of 'virgin birth' occurs when a baby is conceived without male sperm having first fertilized the female's eggs, and has been proven in some bony fish, amphibians, reptiles, and birds. In the type of parthenogenesis seen in these sharks, known as automictic parthenogenesis, the newly forming pup acquires one set of chromosomes when the mother's chromosomes split during egg development.

But instead of uniting with similarly split chromosomes from sperm, as occurs in sexual reproduction, the mother's set is paired with a copy of itself. This results in offspring of reduced genetic diversity who may be at a disadvantage for surviving in the wild.

There have been nearly a dozen reports of suspected virgin births in sharks in recent years, but scientists largely assumed these cases were the result of long-term sperm storage by females after mating with males. Virgin birth is now the more probable explanation, and DNA testing is underway to confirm it in additional sharks.

Tidbit had lived at the Virginia Aquarium in the Norfolk Canyon Aquarium for eight years since shortly after her birth in the wild. Just last May, Chapman and Shivji were part of a team that made the groundbreaking scientific discovery confirming -– for the first time ever -- a virgin birth in a female shark. That shark was a hammerhead residing at an Omaha, Nebraska zoo and had not been in contact with male sharks for at least three years.

That study was published in the journal Biology Letters and captured global media and scientific attention. The DNA-fingerprinting techniques used to prove both cases of virgin birth (scientifically known as 'parthenogenesis') are identical to those used in human paternity testing.

"It is now clear that parthenogenesis occurs in sharks other than just hammerheads," Chapman said. "The first case was no fluke. It is quite possible that this is something female sharks of many species can do on occasion."

Sharks' ability to reproduce alone should not be viewed as an adequate replacement for normal sexual reproduction, Chapman cautioned. For one, the blacktip and hammerhead sharks that reproduced without mating both only produced one pup, rather than an entire litter. Shark litters can contain anywhere from a few to more than a hundred shark pups, depending upon the species.

"The revelation that female sharks can reproduce alone shouldn't stop us from worrying about driving shark populations to very low levels through overfishing," said Chapman. "It is very unlikely that a small number of female survivors could build their numbers up very quickly by undergoing virgin birth."

The new paper is entitled 'Parthenogenesis in a large-bodied requiem shark, the blacktip Carcharhinus limbatus.' Tidbit was an Atlantic blacktip shark whom Virginia Aquarium biologists believe had only just reached sexual maturity. "We have never observed her in reproductive behavior or showing typical signs of having been bred," said Firchau.

Scientists did not even know that Tidbit was pregnant until after she unfortunately died and an autopsy (called a necropsy for animals) was performed. "Sadness turned to surprise during the necropsy when we found that she was pregnant," Firchau said. "There were no male blacktips in the tank for the past eight years!"

Chapman is currently analyzing the DNA of yet another shark species with Dr. Kevin Feldheim of the Field Museum in Chicago.

"The finding of parthenogenesis in blacktip sharks, which are close relatives of some of the larger predatory sharks in the ocean including the tiger, bull and dusky sharks, raises intriguing questions about how frequently parthenogenesis may occur in the wild in this group of heavily fished sharks," said Shivji. "It is possible that parthenogenesis could become more common in these sharks if population densities become so low that females have trouble finding mates."

Populations of all of these sharks have declined in the past twenty years due to overexploitation, mainly to supply the shark fin markets.

The new study was published today in the latest issue of the Journal of Fish Biology.