A new Dutch invention makes it possible to reforest large desert and rocky areas in the coming years, they say. Experiments in the Sahara desert have shown that the WaterBoxx allows trees to grow under harsh conditions and can provide them with sufficient water.

The invention of the Dutch businessman and inventor Pieter Hoff has won the prestigious Beta Dragons Award during the annual Flying Dutchman 2008, Science Technology Summit in Amsterdam. A board of scientists and captains of industry proclaimed his design to be the most promising and innovative project. Philips CEO Gerard Kleisterlee handed him the corresponding amount of 10.000 euro.

The WaterBoxx looks like a plastic, rectangular bucket, with a hole in the centre, allowing the tree to be planted in the soil. The sophistically designed top catches water from condensation at night. Together with the rainwater from rare showers, it is distributed in small doses to the tree inside. Additionally the WaterBoxx prevents water in the top soil layers from evaporating and protects the roots against sun, wind, weeds or rodents. After a year the tree is strong enough to grow by itself and the WaterBoxx can be removed. 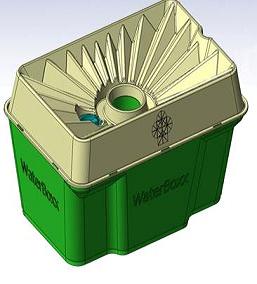 Trees can grow in arid areas but are not able to germinate. The WaterBoxx gives them a head start, Hoff explains.

Hoff is convinced that, if the right species are planted, large parts of the earth can be reforested, without sacrificing agricultural land. He is seeking investors to apply his invention in the Middle East, India, Africa and other arid territories. Hoff: If we can reforest 2 billion hectares, the trees consume more CO2 than men produces and the whole CO2 problem will be solved. His WaterBoxx will be available from July 1, 2009.