Throughout the overlooked depths of Lake Michigan and other Great Lakes, a small but important animal is rapidly disappearing.

Until recently, the animal - a shrimplike, energy-dense creature called Diporeia - was a major food source for commercially important species like lake whitefish and many prey fish upon which salmon, trout and walleye rely. 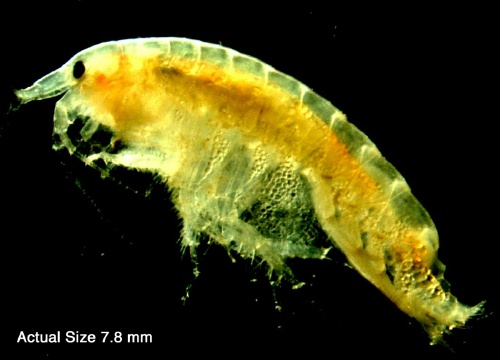 Adult Diporeia, a rice grain-sized crustacean in the same biological class as krill and shrimp. They have served as an important food source for a variety of fish throughout the Great Lakes. Photo credit: Tomas Hook

"We want to narrow down likely causes for this decline," said Sepúlveda, an assistant professor of forestry and natural resources. "It may help us halt the animal's further disappearance."

Sepúlveda has begun to identify substances involved in Diporeia metabolism, the set of chemical reactions that maintain life and allow organisms to respond to stress. Differences in levels of these metabolites between individuals and populations in various regions of the lakes may point toward the stressor or stressors responsible for their decline, she said.

In the same biological class as krill and shrimp, these rice grain-sized crustaceans dwell on lake bottoms and feed on descending algal plankton. Their bodies contain 30 percent to 40 percent lipids like fats and oils, making them a vital energy and nutrient source for the entire food web.

They are already gone from many large areas of lakes Michigan, Huron, Erie and Ontario, said collaborating researcher Tom Nalepa. In Lake Michigan, there are almost no Diporeia found at depths shallower than 90 meters. Just 15 years ago, their density often exceeded 10,000 animals per square meter at such depths, said Nalepa, a research biologist with the Great Lakes Environmental Research Laboratory.

The spread of invasive zebra and quagga mussels - voracious filter feeders with an overlapping diet - largely coincides with Diporeia's decline and is widely believed to be at least partially responsible. But research cannot yet explain the link, Nalepa said.

"We don't know why Diporeia are responding so negatively to the mussels," he said.

Sepúlveda is looking into another possible contributor to Diporeia's decline: water pollutants like pesticides, polychlorinated biphenyls (PCBs), flame retardants or others.

Detailed in a study to be published in print and online next month in the journal Aquatic Toxicology, Sepúlveda measured Diporeia's response to a common pollutant and also began to identify differences between declining populations in Lake Michigan and those native to Lake Superior, the only Great Lake where populations remain stable. The latter comparison found the groups shared only 5 percent of their total metabolites, suggesting that animals from the two lakes are biologically quite different, Sepúlveda said.

"The answer to Diporeia decline may be found in these variations," she said.

Sepúlveda and University of Michigan researcher Tomas Hook were awarded a four-year, $560,000 grant by the Great Lakes Fishery Trust in January of this year to further investigate possible causes for Diporeia's decline. Both researchers are co-principal investigators of the project.

"We are casting a wide net to basically address a number of hypotheses at the same time," said Hook, a fisheries ecologist hired by Purdue who will begin work there this July.

In Sepúlveda's study, she and her team contrasted levels of metabolites between a group of control animals and that of an atrazine-exposed population of laboratory-reared Diporeia. They found that animals subjected to atrazine, a commonly used pesticide present in minute levels in Lake Michigan, significantly increased or decreased bodily production of five identifiable chemicals. These included an insect pheromone, a fatty acid, an amino acid and a hydrocarbon, she said.

"We are just beginning to interpret these data, but they give us a better idea of how pollutants affect them," Sepúlveda said. "If nothing else, our results suggest that seemingly insignificant levels of pollution could significantly harm animals like Diporeia."

The project should help address suggestions by some researchers that Diporeia and/or invasive zebra and quagga mussels may be capable of bioaccumulating or affecting levels of pollutants in a way that might intensify their harmful effects, Sepúlveda said.

The project also should deepen understanding of exactly how the invasive mussels hurt Diporeia, Hook said. Researchers have looked into, but have yet to determine, the extent to which the mussels outcompete the crustaceans for food, contaminate their surroundings with their effusive waste material, or influence the transmission and spread of diseases.

Regardless of the reason, Diporeia's decline has already had some measurable negative effects on various fish species. Alewives, an important prey fish that provides Chinook salmon well over 80 percent of its food, have declined in growth rates, condition - measured as the ratio of weight to length - and caloric density since Diporeia populations began declining, said Charles Madenjian, research fishery biologist with the United States Geologic Survey.

Diporeia previously supplied 50 percent of the food source for the commercially important lake whitefish and now supply only about 5 percent. Since the crustacean's decline began in the 1990s, growth rates and the condition of lake whitefish have substantially fallen off, Madenjian said.

If Diporeia's decline proves to have similar negative consequences upon other species and continues to worsen, the most severe effects may be forthcoming, although it is difficult to predict such outcomes with any certainty, Nalepa said.

Hook said he believes the initial step in taking action is to pinpoint causes.

"The first thing we can do is find out more precisely why they are declining," he said. "If we guess, any management decision we make could be counterproductive."

Zebra and quagga mussels were almost certainly spread to the Great Lakes from Europe or East Asia in the fresh water ballasts of oceangoing vessels, beginning in the late 1980s, Nalepa said. People need to be aware of the risks of spreading harmful invasive species and such ballasts should be more tightly regulated or possibly banned, he said. In one simple preventive measure, boats exchange their freshwater ballast for salt water ballast in the open ocean, thereby killing any freshwater species present.

The study by Sepúlveda used a process called gas chromatography to separate metabolites and matched them with known chemicals on a national database. Researchers identified 76 metabolites among lake-dwelling animals and 302 among the control and atrazine laboratory populations. Results from the two comparative analyses suggest that fatty acids and hydrocarbons are important to the animal's survival or may be interfered with by particular stressors.

Diporeia put on much of their weight during the spring bloom of diatoms, algal plankton they feed upon, during which energy capture and storage are particularly paramount. This leaves them vulnerable to disruptions in food or their ability to store it, a process in which fatty acids play a key role, Sepúlveda said.

The published study was funded by a grant from Purdue's Center for the Environment. Co-authors include Sepúlveda's doctoral student Kimberly Ralston-Hopper as well as Jiri Adamec, Amber Hopf and Cheolhwan Oh, scientists at Purdue's Bindley Bioscience Center.