News Staff
Leonardo Da Vinci had no children but he has relatives.

A new study shows how many and corrects some genealogical errors and documents the continuous male line, from father to son, of the Da Vinci family (later Vinci), from progenitor Michele (born 1331) to grandson Leonardo (6th generation, born 1452) to today; 21 generations in all, including five family branches. It identifies 14 living descendants.

Leonardo himself had (at least) 22 half-brothers but no children. The five family branches are traced from Leonardo's father, ser Piero (5th generation), and half-brother Domenico (6th). Since the 15th generation, data have been collected on over 225 individuals. 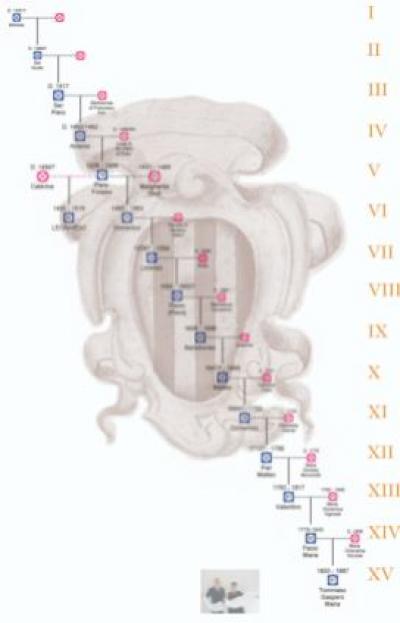 The Y chromosome, passed on to male descendants, is known to remain almost unchanged through 25 generations. Comparing the Y chromosome of today's male relatives with that of their ancestors in ancient and modern burial sites would both verify the uninterrupted family line and certify Leonardo's own Y chromosome marker.

A lot of mysteries remain around Da Vinci; there is little information on his parents' geographical origins, and also questions about his premature aging, diet, health and any hereditary diseases, his extraordinary vision, synaesthesia and other sensory perceptions, not to mention his physical prowess. Even his left-handedness is cause for speculation. His lack of children led to speculation on his sexuality then and now.

Science can't answer all of those but this kind of work can fill gaps in family tree data Ccomparison of biological data could also potentially help verify the authenticity of artwork and materials handled by Leonardo, thereby pioneering links between biology and art with broad implications for the world's art market in terms of artistic attribution and materials.
News Articles
More Articles All Articles
About