Pond scums were an animal’s best friend. 540 million years ago, oxygen was scarce in the atmosphere and ocean, and animals needed to find oxygen to make a living. If you think farming is hard now, imagine when it involved first finding enough to breathe.

But that's good for us, because it led scientists to finding the oldest footprints on Earth to-date, 10 million years older than the previous record.  Found in a small chunk of sediment rock in a shallow sea bottom in China, the tiny tracks – millimeters in width – were made by an unknown bug-like creature no bigger than a thumb. The footrail is only a few inches long, no bigger than an average hand palm.

And the footrail was likely due to the lack of oxygen. The animals may have dug into the microbial mats to mine oxygen or food. The microbial mats, constructed by a group of photosynthetic bacteria known as cyanobacteria that produced oxygen as a side product, were a reliable source of both oxygen and food for early animals.  The team discovered the trackway fossils from rocks in the Yangtze Gorges area of South China. 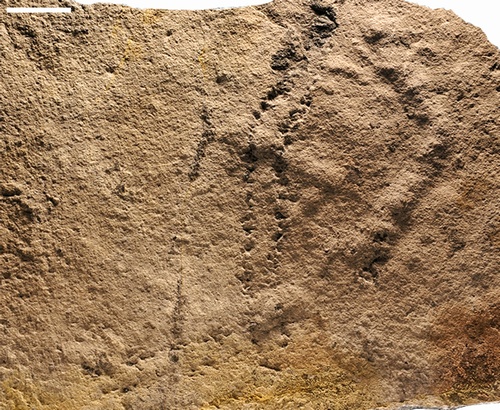 What animals would have made them? That is not known, but they have legs, which are vital to the world we have today.  “The formation of legs helped animals to change the world. Animals use legs and limbs to move sediments, to help mate, to feed, to fight, and, of course, to travel,” said  Shuhai Xiao, of the Virginia Tech College of Science.  “Many animals, from bumble bees to bristle worms, have legs or leglike appendages. Some have a few appendages, others, such as centipedes and millipedes, have hundreds, but all have an even number of appendages placed symmetrically on both sides of the body. Appendages come in different forms, some are jointed legs as in bumble bees, and others are simple outgrowths of the body.”

Xiao and his team gauge the little crawler may have had legs similar to a bumble bee or a bristle worm, as evidenced by the width and gait of the tracks. The trackways – so tiny they can be missed if seen at the wrong angle or in low light – are about half an inch in width and a few inches in length, consisting of two rows of dimples on the surface of the rocks.

“Oddly, the tracks sometimes transition into tunnels, suggesting that the animals occasionally dug into the microbial mat,” added Xiao.