News Staff
Viruses have strategies. They may not be dominated by politics or people who have desire to work in government but they are strategies just the same.

Unable to reproduce on their own, viruses replicate by infecting a living organism's cells and getting the cells to make copies of them. Two main options exist for copies of a virus's genetic structure made in the cell: stay in the cell as a template for making even more copies or get packaged as a new virus and leave in an attempt to infect other cells. The stay strategy initially produces copies of the genetic code faster, while the leave strategy emphasizes newly infecting cells. How do they evaluate these opposing evolutionary strategies?

Each option comes with trade-offs, so an individual virus's strategy of how much weight to place on each one should directly influence the progression of an infection and any health problems it may cause. 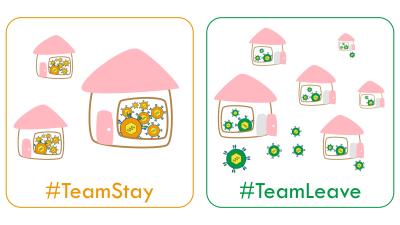 Yet what are those strategies comprising? A new paper mathematically models the behavior of two hepatitis C virus strains to evaluate two such strategies. While one of the studied virus strains causes severe and sudden symptoms, the other is a genetically modified version developed in the laboratory to increase virus production, which is important for creating stocks of viruses for the development of treatments and vaccines.

As an experimental base for the modeling, the team measured characteristics of each virus's behavior--such as number of infected cells and the amount of viral genetic code inside and outside of the cells--over several days for cells grown and infected in the lab.

They then developed a mathematical model with parameters to take into account key processes like the replication and release rates of the viral genetic information to explain the experimental data.

By finding the range of model parameters that reasonably reproduce the experimentally observed results, they could quantify differences in behavior between the two strains. In particular, they estimated that the fraction of replicated genetic code packaged by the lab-developed strain to make new viruses was three times that for the other strain, indicating the preference of a leave strategy for the former and a stay strategy for the latter.

The current model does have some limitations, such as assuming some processes are constant and excluding some of the detailed biological processes, but for now, it provides a relatively simple way to gain an overall insight into two virus strategies.
News Articles
More Articles All Articles
About