Mutating Ebola Viruses Not As Scary As Evolving Ones
By The Conversation | September 2nd 2014 06:02 AM | Print | E-mail 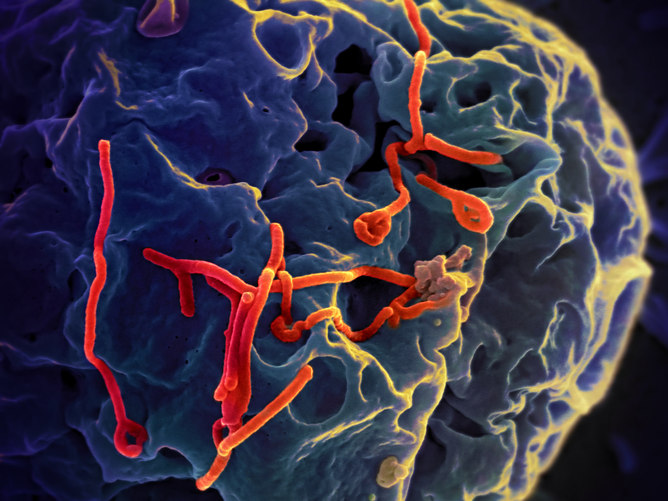 My social media accounts today are cluttered with stories about “mutating” Ebola viruses. The usually excellent ScienceAlert, for example, rather breathlessly informs us “The Ebola virus is mutating faster in humans than in animal hosts.”

But what does that even mean? Should we be terrified of mutant viruses?

The story is based on a paper just published online at the journal Science under the title Genomic surveillance elucidates Ebola virus origin and transmission during the 2014 outbreak. It’s a timely piece of genetic detective work sequencing Ebola virus genomes from 78 patients in Sierra Leone. Viruses accumulate genetic changes through mutation and selection within a host, so the team sequenced multiple viruses from several of the patients making up 99 genomes in total.

They found that mutations - minute changes in the virus genetic code - have accumulated rapidly, both during infections of individuals and during the outbreak of the current epidemic. The accumulation of genetic changes can tell us about the dynamics of an outbreak because when one patient infects another, the virus in the second patient is the descendant of the virus in the first, and contains all mutations that had accumulated in the first, plus any new mutations that occur in the second patient.

The Science paper concludes, from studying these changes, that the current West African outbreak comes from a single zoonotic infection (when a virus crosses from an animal to humans, which is how Ebola outbreaks start). The virus, living in animals like fruit bats, last shared an ancestor with the Middle African strains (which have repeatedly infected people in places like the Democratic Republic of Congo) in approximately 2004.

The virus behind this outbreak made the jump to humans late last year, in Guinea. The key event in the spread to Sierra Leone was the funeral of a faith healer who claimed to be able to cure Ebola patients. When she contracted Ebola and died in late May, a large number of people attended her funeral.

Twelve of the first Ebola cases in Sierra Leone all attended that funeral, and appear to have contracted the virus there. These include two distinct forms of the virus which diverged, in Guinea, in late April.

This paper represents a superb piece of investigative genomics. Because Ebola viruses replicate (make copies of themselves) so rapidly and the epidemic has spread so quickly, there exist many small changes in the virus genome with which to track what has happened.

Are the mutations dangerous?

And those changes have accumulated far faster since the virus made the jump into humans, triggering the current epidemic. Which is the finding behind the headlines that the Ebola virus is mutating rapidly.

Nobody can tell whether mutations happen more rapidly in human infections than in the reservoir host animals where most viruses live. What has happened is that mutations have accumulated twice as fast in the course of this infection as they typically do during the long stretches living in other animals.

So when Reuters' Julie Steenhuysen writes “more than 300 genetic changes in the virus as it has leapt from person to person”, she’s not talking about some mysterious, sinister process that literally happens in the air between one host and the next. Ebola isn’t even an airborne disease; it is transmitted in bodily fluids.

These mutations are simple mistakes in the genetic code, made when the virus is replicating within a host. With millions of replication events during thousands of infections, a huge number of mistakes happen. Steenhuysen quotes study lead author Pardis Sabeti (Harvard University and the Broad Institute) who points out just how mundane this process really is:

We found the virus is doing what viruses do. It’s mutating.

The majority of mutations either render the virus useless at doing its job, or have no effect. Its “job” being to make more copies of the virus and occasionally to infect another host.

So the mutations that do get passed on are usually the very few that succeed at improving the rate of virus replication, or the rate of infection. Exactly how many of the mutations alter the effectiveness of the virus at replicating and being transmitted, and how they do so, remains to be established. And the study’s authors certainly expect this to be an important follow-up:

Since many of the mutations alter protein sequences and other biologically meaningful targets, they should be monitored for impact on diagnostics, vaccines, and therapies critical to outbreak response.

When mutations arise - and they always arise - and effect the way in which an organism (yes, I know some people don’t like calling viruses “living organisms”) makes copies of itself, we have the two main ingredients for natural selection. There can be no clearer or more frightening illustration of natural selection and its inevitable result - biological evolution - in the modern world.

For some, reason, however, the popular press doesn’t like calling evolution - the most important biological process of all - by its proper name. “Mutation” and “development” are neither synonyms, nor euphemisms for evolution.

The reason mutations have accumulated so rapidly during this epidemic is that the virus is in a new host - human beings. While other versions of the virus have jumped across to humans before, the Ebola viruses currently ravaging West Africa have spent all of their history in other animals. They are now adapting to human bodies, tissues and immune systems. The mutations that help the virus work most effectively in the human body and transmit most effectively from sufferer to uninfected victim are the ones we are going to be hearing a whole lot more of in the coming months.

So we have little to fear from mutating viruses. It is the rapidly evolving viruses, fixing the mutations that randomly occur like typos in a Tweet, that we should seriously fear.

Rob Brooks, Professor of Evolutionary Ecology; Director, Evolution&Ecology Research Centre at UNSW Australia, does not work for, consult to, own shares in or receive funding from any company or organization that would benefit from this article, and has no relevant affiliations.