News Staff
The umbrella term for the 68 percent of the universe that we can't detect and know nothing about has been given the umbrella term "dark energy." Like wormholes 30 years ago, it is more MacGuffin than science. You could call it aether or magic or any deity name and be just as valid.

But inference says something, or a variety of somethings, must be causing the universe to expand when gravity says it should contract. So dark energy it is.

Except maybe it isn't.

Our universe was formed in the Big Bang, ~13.8 billion years ago, and has been expanding ever since, according to Hubble's law, based on observations of galaxies, which states that on average, the speed with which a galaxy moves away from us is proportional to its distance.

Astronomers measure this velocity of recession by looking at lines in the spectrum of a galaxy, which shift more towards red the faster the galaxy is moving away. From the 1920s, mapping the velocities of galaxies led scientists to conclude that the whole universe is expanding, and that it began life as a vanishingly small point. In the second half of the twentieth century, astronomers declared evidence for unseen 'dark' matter by observing that something extra was needed to explain the motion of stars within galaxies. Such dark matter is now thought to make up 27 percent of the content of universe, while the actual universe amounts to only 5 percent, scientists believe.

What makes up the difference? The far less acceptable notion of dark energy arose when observations of the explosions of white dwarf stars in binary systems, so-called Type Ia supernovae, led scientists to speculate that a third component, dark energy, made up 68% of the cosmos, and is responsible for driving an acceleration in the expansion of the universe.


The expansion of the universe in the standard 'Lambda Cold Dark Matter' cosmology, which includes dark energy (top left panel red), the new Avera model, that considers the structure of the universe and eliminates the need for dark energy (top middle panel, blue), and the Einstein-de Sitter cosmology, the original model without dark energy (top right, green). The panel at the bottom shows the increase of the 'scale factor' (an indication of the size) as a function of time, where 1Gya is 1 billion years. The growth of structure can also be seen in the top panels. One dot roughly represents an entire galaxy cluster. Units of scale are in Megaparsecs (Mpc), where 1 Mpc is around 3 million million million km. Credit: István Csabai et al.

And so the plot of Thor 2 was born.

But a team of scientists invoke Occam's razor and dispute all-powerful unseen magic with something simpler. They argue that current hypotheses of cosmology (the study of the origin and evolution of the universe), rely on approximations that ignore its structure, and where matter is assumed to have a uniform density.

"Einstein’s equations of general relativity that describe the expansion of the universe are so complex mathematically, that for a hundred years no solutions accounting for the effect of cosmic structures have been found. We know from very precise supernova observations that the universe is accelerating, but at the same time we rely on coarse approximations to Einstein’s equations which may introduce serious side-effects, such as the need for dark energy, in the models designed to fit the observational data." explains Dr László Dobos, co-author of the paper, also at Eötvös Loránd University. 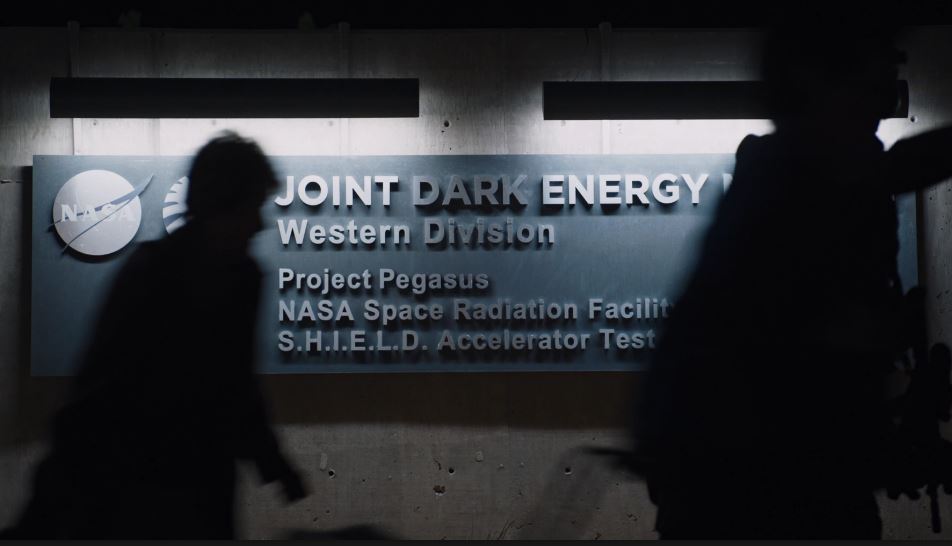 Is dark energy, like Marvel's SHIELD, fiction rather than fact? Credit: Disney

In practice, normal and dark matter appear to fill the universe with a foam-like structure, where galaxies are located on the thin walls between bubbles, and are grouped into superclusters. The insides of the bubbles are in contrast almost empty of both kinds of matter.

Using a computer simulation to model the effect of gravity on the distribution of millions of particles of dark matter, the scientists reconstructed the evolution of the universe, including the early clumping of matter, and the formation of large scale structure.

Unlike conventional simulations with a smoothly expanding universe, taking the structure into account led to a model where different regions of the cosmos expand at different rate. The average expansion rate though is consistent with present observations, which suggest an overall acceleration.

Dr Dobos adds: "The theory of general relativity is fundamental in understanding the way the universe evolves. We do not question its validity; we question the validity of the approximate solutions. Our findings rely on a mathematical conjecture which permits the differential expansion of space, consistent with general relativity, and they show how the formation of complex structures of matter affects the expansion. These issues were previously swept under the rug but taking them into account can explain the acceleration without the need for dark energy."
News Articles
More Articles All Articles
About