News Staff
A new paper uses a combination of cosmic voids – large expanding bubbles of space containing very few galaxies – and the faint imprint of sound waves in the very early Universe, known as baryon acoustic oscillations, that can be seen in the distribution of galaxies, to show how large structures in the distribution of galaxies in the Universe can provide the most precise tests of dark energy and cosmic expansion yet.

Dark energy is the lesser-known cousin of dark matter. The matter of the universe, what we can detect, can only account for about 5 percent of what is out there. Using inference, there can be 25 percent that can be under the umbrella term of dark matter. The remaining 70 percent is called dark energy, but it could just as well be called the Aether or Asgard. That's how little is known.

Yet something is causing the universe to not only expand, but expand faster than light allows; the universe is 13 billion years old but overt 100 billion light years in size. That driver is whatever dark energy is.

What is needed is a way to make it more science and less speculation is a better way to measure the effects of dark energy driving the accelerated expansion of the Universe.

Observation of exploding massive stars, or supernovae, is the go-to method for inferring the effects of dark energy and a recent study makes use of data from over a million galaxies and quasars gathered over more than a decade of operations by the Sloan Digital Sky Survey to try and affirm the model of a cosmological constant dark energy and spatially flat Universe. 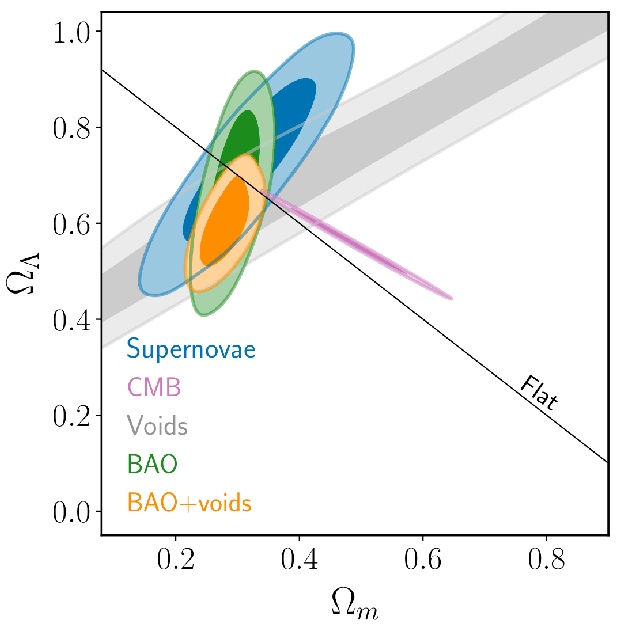 The values of the energy density of matter (

Precise measurement of the Hubble constant is a subect of debate so the story will not end with this paper.

“We see tentative evidence that data from relatively nearby voids and BAO favour the high Hubble rate seen from other low-redshift methods, but including data from more distant quasar absorption lines brings it in better agreement with the value inferred from Planck CMB data,” says co-author Dr. Florian Beutler from the University of Portsmouth.
News Articles
More Articles All Articles
About