News Staff
In a recent paper, Lehigh University anthropologist Professor Allison Mickel says archaeological excavations are often led by foreigners from the West while dependent on the labor of people from the local community, a relic of Western colonial and imperial pursuits.

Examining some of this history specifically in the context archaeological excavations undertaken in the Middle East, Mickel wrote: "Even well into the 20th century, locally hired excavation workers continued to benefit little from working on archaeological projects, still predominantly directed by European and American researchers who paid extremely low wages and did not share their purpose, progress, hypotheses, or conclusions with local community members."

Mickel argues that the framework established by the German economist Karl Marx of the capitalist mode of production can be seen in 19th century archaeological work in the Middle East and dutifully quotes the communist proponent; "...the capitalist mode of production leads to workers experiencing a sense of powerlessness and an inability to fulfill the potential of their own skills, expertise, and abilities." 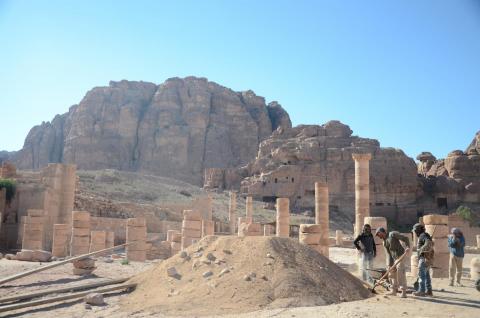 She criticizes Italian archaeologist Giovanni Battista Belzoni's approach to securing and retaining local laborers for his work in Egypt, which began in 1816 and exemplified the conditions of modes of production that led to his workers' "...alienation in the Marxist sense," beginning with how much he paid them. "Monetarily devaluing the archaeological work of native Egyptians in this way engenders an understanding that archaeological labor is quite literally of little worth--one that in Marx's view deeply impacts the self-image of the workers in a production process. Not only were the workers paid next to nothing for performing the manual labor of Belzoni's endeavors, they were also not involved in the conceptualization of the project. In the end, the antiquities were subsequently shipped thousands of miles away, challenging both ideologically and spatially any relationship between the workers and the archaeological objects being unearthed through excavation, as well as the knowledge gleaned from them."

Mickel also writes about Belzoni's use of strong-arm tactics. These include allegations of resorting to physical violence and paying a foreman extra to get laborers to return to work during a strike. During his famed excavation of the Memnon Head in 1816, Belzoni had to leave the site for an extended period of time in order to raise funds to pay workers. He believed, writes Mickel, "...that the workers and their families were too lazy to dig on their own..."

He was right, little digging occurred while he was off raising money to pay them, but rather than acknowledge that workers weren't going to work for free she says they were resisting exploitation.

In examining the memoir of British archaeologist Sir Austen Henry Layard, Mickel infers that although Layard worked in the same region and during the same time period as Belzoni, his workers' responded to similar working conditions very differently.

"Operating under extremely similar circumstances," writes Mickel, "the groups of workers examined here made very divergent decisions about how best to respond to an exploitative labor system, whether to rise up demonstratively against it or to resist the devaluation of their work by establishing themselves as essential to the production of artifacts and historical knowledge."

Layard's strategies for hiring and managing a local labor force had much in common with Belzoni's, including elements of capitalist labor relations modes such as low wages. Additionally, Layard's memoirs suggest "...that he viewed the total excavation endeavor as metaphorically signifying the superiority of Western civilization over Oriental peoples and cultures."

And yet Layard's workmen, explains Mickel, often appear in his writing as trusted experts in the excavation process: "These men developed impressive excavation abilities that Layard himself recognized, repeatedly hiring the same groups of people for season after season and site after site. One native Assyrian man whom he hired again and again, Hormuzd Rassam, ultimately went on to lead his own excavations on behalf of the British Museum at places like Nimrud and Nineveh; Rassam even published his own archaeological memoirs for popular distribution like Layard and other archaeologists of the time"

So the British were more benevolent colonizers than the Italians.

Mickel compares these two contexts and concludes: "Operating under extremely similar circumstances, the groups of workers examined here made very divergent decisions about how best to respond to an exploitative labor system, whether to rise up demonstratively against it or to resist the devaluation of their work by establishing themselves as essential to the production of artifacts and historical knowledge."

Mickel believes that an improvement of labor practices would benefit not just workers, but archeology as a whole. She argues for ways in which the field could be producing better science if archaeologists were to change their labor practices.
News Articles
More Articles All Articles
About