News Staff
Responding to chemical changes is a crucial function of biological cells. For example, cells can respond to chemicals by creating certain proteins, boosting energy production, or self-destructing. Chemicals are also used by cells to communicate with each other and coordinate a response or send a signal, such as a pain impulse.

However, in natural cells these chemical responses can be very complex, involving multiple steps. This makes them difficult to engineer, for example if researchers wanted to make natural cells produce something useful, like a drug molecule, but now scientists at Imperial College London scientists have created artificial cells that mimic biological cells by responding to a chemical change in their surroundings.

These new artificial cells that can sense and respond to an external chemical signal through activation of an artificial signaling pathway. They created cells that sense calcium ions and respond by fluorescing (glowing). 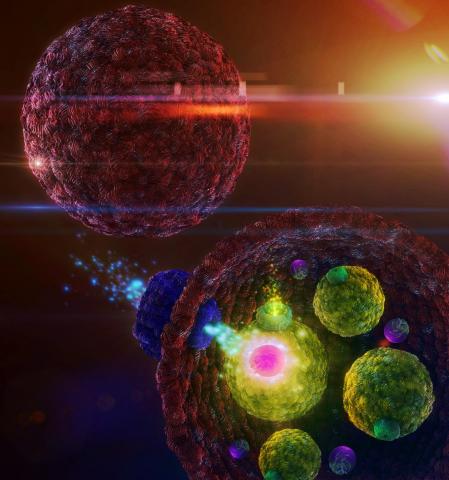 Calcium enters the artificial cells through a pore, which activates enzymes that cause the vesicles to release fluorescent particles through a protein channel. Credit: Zehua Hu / Imperial College London

The team created an artificial cell that has smaller cells ('vesicles') inside. The edge of the cell is formed of a membrane that contains pores, which allow calcium ions to enter. Inside the cell, the calcium ions activate enzymes that cause the vesicles to release particles that fluoresce, without by-products that are toxic to the cell. Within the system, the membrane pores and the enzymes activated by calcium are from existing biological systems - the enzyme is taken from bee venom for example - but they would not be found in the same environment in nature.

The researchers say this is the strength of using artificial cells to create chemical responses - they can more easily mix elements found apart in nature than they can add an external element into an existing biological system.
News Articles
More Articles All Articles
About