News Staff
It is common today to have food, or even a feast, to memorialize the dead. It is a legacy from ancient times.

Across the Roman Empire, funerary rituals were conducted to ensure the protection of deities and the memory of the deceased.  They were required by law.

Faunal remains recovered inside the graves and around them provide evidence that funerary meals and rituals developed in the Roman necropolis were special and implied food that differed from everyday dietary habits but a recent study analyzed the archaeozoological and anthropological material from the necropolis of Vila de Madrid (Barcelona, Catalonia), which was in use between the first half of the 2nd century AD and mid 3rd century AD, found that people used what they had. 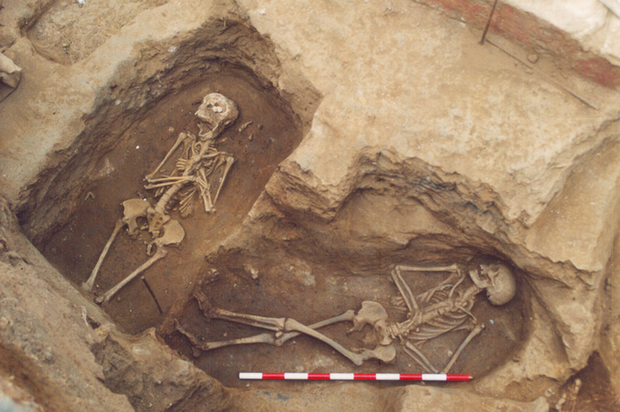 Analysis of the faunal remains as well as carbon and nitrogen stable isotope ratios results on bone collagen from 50 faunal specimens and 41 humans found that funerary meals did not involve different food than that consumed during life. Regarding age, sex, offerings and diet, some differences are observed, suggesting logically that inequalities present in life were also present in funerary rituals. Rich people ate well and poor people did not.

Instead, the most commonly used meats in the rituals – pork, beef, and caprine (goat) – were the most consumed meats in life. Finally, these meats were mainly consumed from adult individuals. These data suggest that despite offerings and banquets being stipulated by law, not everyone could afford anything exotic. The relatives of the deceased tried to follow the law but in Spain there was a high consumption of meat of adult males during their lives but only a slightly different composition at grave sites.

What was different from today is that the meals were held at the grave and food was left behind. Some even had pipes or holes to place food inside. It was also common for a cena novendialis (translation is literally dinner of the 9th day) to be eaten at the grave on the ninth day after the funeral.
News Articles
More Articles All Articles
About