News Staff
Virtual Reality devices are advertised everywhere but have as much uptake as USDA nutrition guidelines or 3-D televisions. One reason is that it's a lot of money for something you can use for 20 minutes without fatigue. Another is VR sickness, a type of motion sickness which comes from users seeing “motion” through their headsets without actually moving. The symptoms include headaches, nausea, and sometimes vomiting.

A new methodology hopes to help ease that. The collaboration was able to let users on Segways share not only what they see but also the feeling of acceleration as they move. Riders equipped with cameras and accelerometers can feedback their sensations to a remote user on a modified wheelchair wearing a VR headset.

At least on surveys, participants who had volunteered reported less sickness. 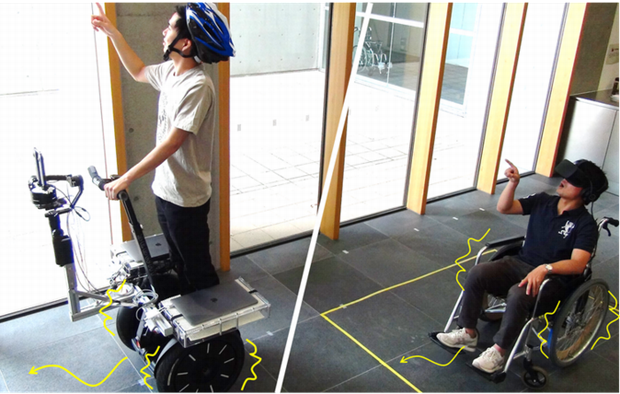 It may be because they added the sensation of movement as well. They focused on Segways as a cheap, widely available personal mobility vehicle, mounting two 3D cameras and a set of accelerometers to measure not only visual cues but detailed information on the acceleration of the vehicle. This was fed back via the internet to a remote user wearing a VR headset on a modified wheelchair, with separate motors attached to the wheels. As the user on the Segway accelerated, so did the wheelchair, allowing remote users to not only see the same scenery, but feel the same acceleration. Of course, the wheelchair wasn’t allowed to move the same distances as the Segway; it was gently returned to its original position when the Segway was not accelerating.

The team put their device to the test by asking volunteers to become remote users and rate their experience. There was a reduction in VR sickness of 54% when the sensations of movement were added, with excellent ratings for the user experience. They also noticed subtleties in how the information should be fed back. For example, users found it best when around 60% of the acceleration suggested by the visual cues was fed back to the wheels, largely due to the sensitivity of the vestibular system (how we sense balance, orientation and motion) compared to our vision.