News Staff
In Insectivorous Plants, Sir Charles Darwin pondered carnivorous plants. They live in habitats poor in nutrients, mostly on nitrogen and phosphorous, and have compensated this lack with the ability to digest animals such as insects and other arthropods.

Adapting and surviving with a carnivorous diet in nutrient-poor soils is an evolutionary process that some evolutionary unrelated species have been going through, repeatedly and independently, from the same set of genes and proteins, according to a new study in Nature Ecology&Evolution.

All plants are photosynthetic organisms, that is, they turn transform the inorganic matter of the environment into organic molecules (glucose). To complete the lack of nutrients of some soils, carnivorous plants can catch and absorb nutrients from a prey, thanks to an exclusively biological mechanism. Carnivorous plants are a clear example of convergent evolution, probably due the heavy biological restrictions imposed by extreme nutrient-poor ecosystems. That this convergence was accompanied by a parallel molecular evolution in digestive enzymes makes this system an interesting example from the perspective of the study of the evolutionary process. 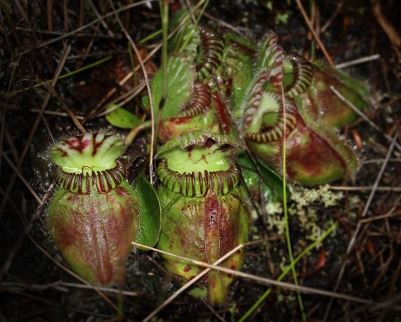 According to this study, natural selection has taken similar evolutionary routes so that plants can feed from other animals to complete their diets. Credit: Universidad de Barcelona

The authors sequenced the genome of the pitcher plant (Cephalotus follicularis), an Australian species that can be identified for its insectivorous leaves – pit-fall traps that catch insects - very different from the other leaves. The genome of this species, the second carnivorous plant with the complete genome sequenced after Utricularia gibba, is relatively large, and consists of 1.6 Gb, which is almost half of the human genome. The researchers have identified more than 36,000 genes.

“According to the results, leaves that catch insects have gained new enzymatic functions: basic chitinase, which breaks down chitin (main component of insects’ exoskeleton), and purple acid phosphatase which releases phosphate groups from molecules, and it contributes to the mobilization of the prey’s phosphate,” says professor Julio Rozas, who leads the Evolutionary Genomics and Bioinformatics research group at the University of Barcelona.

"In the study, we have stated that genes originally involved in the defence against certain diseases –or the response to biotic and abiotic stress- have acquired new functions (co-option) related to the ability of feeding from animals. This is the case, for instance, of a specific set of proteins that evolved to act as digestive enzymes,” said Pablo Librado, also from University of Barcelona. “The results of co-option, regarding both the digestive enzymes and the amino acid changes seen in these enzymes, show that evolution has acted on a limited number of evolutionary routes in the adaptive transition to the carnivorous diet.”