News Staff
In the 1800s, critics of evolution insisted there had to be fossil evidence for everything, which neglected the idea that fossilization is already difficult, finding the fossil is even more difficult, and something like an eye will not fossilize at all.

But detractors who insisted they would not accept evolution until they found a "missing link" between modern humans and ancestral primates would be moving the goalposts once again, because a fossil of an ancient hominin individual from Siberia had a Neanderthal mother and a Denisovan father.

Until 40,000 years ago, there were two known groups of hominins on the Europe/Asia continent. Neanderthals inhabited the west and Denisovans were in the east. Now it is shown they were sexually compatible, and a female, age around 13, had a parent from each. "Denisova 11" was found in 2012 at Denisova Cave in Russia and a new analysis shows she had a Neanderthal mother and a Denisovan father. 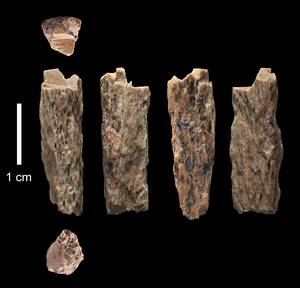 Mainstream media are talking about a "hybrid" but that is because journalists rarely understand science. They are the same people who think a northern white rhino and a southern white rhino are separate species and one is going extinct. It remains unclear whether or not Neanderthal and Denisovan were truly distinct species by the time of this discovery. What is clear is that they had enough in common to reproduce, which means they shared ancestry and this fossil fills in a gap.

There is also good news for anthropologists. It means Neanderthals were still migrating between western and eastern Eurasia tens of thousands of years before their disappearance, during the last Ice Age. And that means migration may have been happening back the other way as well.