Evolutionary adaptations have allowed Tibetans to have no trouble living at 13,000 feet, but how they became able to conquer the harsh environment of hypoxia has long been a mystery.

Genetic studies on Tibetans' adaptation to high altitude indicated that a hypoxia pathway gene, EPAS1, had the most extreme signature of positive selection in Tibetans, and was shown to be associated with differences in hemoglobin concentration at high altitude. In a recent study, researchers re-sequenced the region around EPAS1 in 40 Tibetan and 40 Han individuals, and found this gene in Tibetans harbored a highly differentiated haplotype, which was only observed in the extinct Denisovan genome but not in the populations from worldwide, except for a single Southern Han Chinese and a single Beijing Han Chinese individual.

The name comes from a cave called Denisova in souther Siberia, named after an 18th century hermit. A primate fingertip in a place where there were no apes or monkeys and a mitochondrial DNA analysis led to the conclusion it was neither modern human nor neanderthal, but rather a third branch that shared a common ancestor with the other two a million year ago. 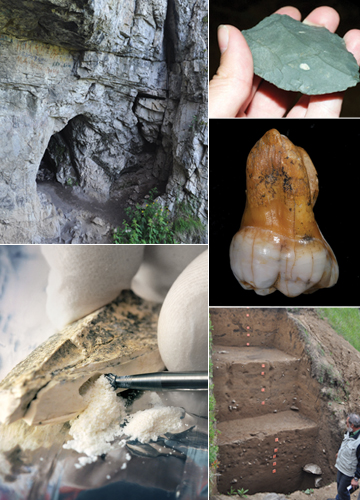 The layers of sediment excavated in Denisova Cave (top left) and its surroundings have yielded such artifacts as chipping tools (top right), a fragment of a pinky bone, and a molar. DNA in the bone and molar led to the identification of a new hominin group, the Denisovans.
Photos courtesy of David Reich (top left, top right, bottom right); Photo courtesy of the Max Planck Institute for Evolutionary Anthropology (bottom left, middle right). Link: Harvard

Since then, scientists have found evidence for Denisovan admixture throughout Southeast Asia (as well as in Melanesians). Given this conclusion and their findings, researchers suggested that Tibetans' ancestors may interbred with Denisovan, which could explain why the presence of Denisovan haplotype outside Melanesia. Moreover, this gene-flow from Denisovan to Tibetans may facilitate Tibetans to adapt the harsh high-altitude environments, which sheds new light on the gene-based study on human evolution and adaptation.

Xin Jin, Research Scientist from BGI, said, "The Denisovan-like DNA we found in the genome of Tibetans implied that the adaptation to local environments could be facilitated by gene-flow from other hominins who have been adapted to such environments. This unique finding may help us re-examine the similar fast-evolution cases in the future."

Asan Ciren, Another researcher from BGI, said, "The genetic relationship or blood relationship between modern human and archaic hominins is a hot topic of the current paleoanthropology. The finding of Tibetans's selected EPAS1 haplotype in Denisovans not only demonstrates the possibility of ancient gene-flow from Denisovans- or -like population to ancestors of Tibetans , but also shows the importance of such events in local adaptation of modern humans."