For Consideration: Use Opioid Overdoses For Organ Transplants
By News Staff | June 6th 2019 07:54 AM | Print | E-mail

News Staff
Though the U.S. government and its hand-picked panel are claiming that the "opioid epidemic" is legitimate pain patients getting hooked on drugs because of lazy doctors and greedy pharmaceutical companies, the reality is much different. Only a small number of people considered addicted to opiods are not instead recreational users.

Since the majority are young recreational users, often getting drugs illegally, their risky lifestyles are also evident in numerous other ways, making them seem less than "perfect" donors for transplant - you don't want to give a transplant patient hepatitis C, obviously. But we remain short of organs for transplant. Allowing people to sell them is off the table and lab-grown versions of the "big five" organs remain in the future. Transplants are still needed. Why not mitigate the needless deaths, often the result of recreational overdose, by allowing such overdose death donors to be used for more transplants?

It has worked well for hearts. 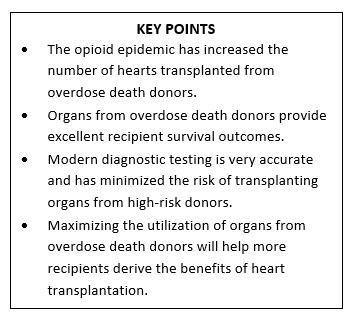 In a recent paper, Nader Moazami, MD, of NYU Langone Medical Center in New York and colleagues evaluated trends in organ donation and transplants among drug overdose deaths using data from the Scientific Registry of Transplant Recipients for the years 2000 to 2017. Of the 15,904 isolated heart transplants from adult donors during this period, opioid overdoses (10.8 percent) were the fourth most common cause of death, behind blunt injury (30.5 percent), hemorrhage/stroke (22.1 percent), and gunshot wound (18.3 percent). In 2017, overdoses accounted for more than 20 percent of donor deaths in 11 states; whereas in 2000, the highest state's rate was 5.6 percent and 33 states had less than 1 percent of donor deaths attributed to overdoses. The researchers also identified a significant increase in the percentage of transplants that utilized ODD hearts: 1.1 percent in 2000; 6 percent in 2012; and 14.2 percent in 2017. The current rate of ODD utilized for heart transplantation is 16.9 percent--a 14-fold increase from 2000.

"The dramatic increase in the rate of ODD utilization was striking, and it has increased concordantly with the rate of overdose deaths," said Moazami. "The significant impact of the opioid epidemic on transplantation is one of the major reasons that organ transplant numbers have increased over the last several years."

The researchers predictably found that donors who died from opioid overdoses were frequently younger than age 40 and had higher rates of substance abuse yet lower rates of diabetes and hypertension. As a result, the researchers found that ODD hearts had "favorable heart donor quality" and provided excellent outcomes equivalent to all other mechanisms of donor deaths (non-overdose).

"We do not believe that overdose status alone is a valid reason to discard an otherwise viable donor heart, and this study supports that ODD organs should not be rejected due to inappropriate bias," said Dr. Moazami. "With no significant difference in survival between ODD and non-ODD recipients, further expansion of this donor pool may be appropriate, with more hearts potentially used for transplantation."

For other organs, the opioid epidemic has also boosted the number available for donation in the US. In another study, opioid ODD provided 7 percent of the transplanted lungs from 2010-2017, up from 2 percent in 2000-2007. The overall findings also concurred with those of this recent study, suggesting that ODD lungs do not pose any extra safety risk to transplant recipients.
News Articles
More Articles All Articles
About