News Staff
If you have a large picture and you want people to focus on certain aspects of it, you frame it in such a way the eyes are drawn to it.

It's no different in media. Though journalists try to be objective each news outlet has self-selection bias, determined by advertisers and subscribers. If you are going to be a journalist at Fox News or the New York Times, there will be a hidden values test you must pass, even if editors and hiring groups are not aware they do it.

This framing results in definable changes in public perception, according to frame-by-frame analyses of coverage during the first two 2016 Republican and Democratic primary debates. The big beneficiary, intended or not, was Donald Trump. Because he was polarizing among Republicans and the favored candidate of Democrats, he received more camera time and solo shots. 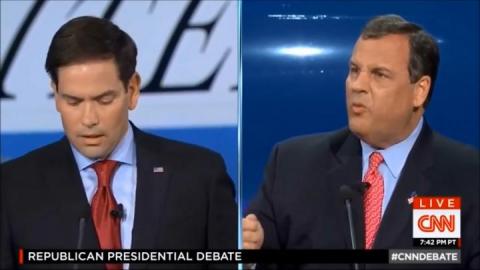 An example of split-screen framing with candidates Marco Rubio on the right and Chris Christie on the left. Credit: Patrick Stewart

Do media reflect winners and losers or create them?

Among Democrats, Hillary Clinton received the greatest amount of camera time in both debates, followed by Bernie Sanders.  Among Republicans, Trump garnered the most camera time, followed by Jeb Bush and media can argue in both cases it was because polling numbers at the time showed those two in each party were polling highest. They were following the public's interest, not shaping it.  But Trump and Clinton got proportionately less screen time than other candidates in group shots, with camera shots focusing on them either as the leader or the premier competitor for leadership.

Of those two, Trump was the leader, perhaps because on the Democratic side there were far fewer choices early on.

Yet double-digit candidates are the scenario Democrats face this time, so primary contenders may need to work on being controversial or interesting enough they get out of the groups shots and into more solo coverage.

"If seeing is believing, then who chooses what and who we see, and how we see them, has enormous influence and responsibility for a functioning republic," said Patrick A. Stewart, associate professor of political science at the University of Arkansas.
News Articles
More Articles All Articles
About