News Staff
The discovery of an ancient painted vase in the Central America lowlands offers new clues into the mysterious breakdown of ancient Maya civilization - because it bears one of the longest hieroglyphic texts ever found.

The shattered vessel was discovered in excavations at the Maya site of Baking Pot in Belize, found amid artifacts associated with the abandonment of the royal palace complex. The fragments were found in a corner near a palace entrance. The archeology team also unearthed blades, pendants, inkpots, fragments of flutes — and human bones - in burial sites.

When excavation leader Dr. Julie Hoggarth, anthropologist at Baylor, saw the first fragment, she spotted the emblem hieroglyph for “Yaxha” — an ancient Maya city and ceremonial center in Guatemala - and so began the search which led to a new book, “A Reading of the Komkom Vase Discovered at Baking Pot, Belize”, containing photos, illustrations and detailed translation and analysis of the hieroglyphs and text, which unfolds tales political upheaval, alliances, warfare, rituals, Maya rulers’ genealogy — and “propaganda about royalty” — during an era of “godly kings.” 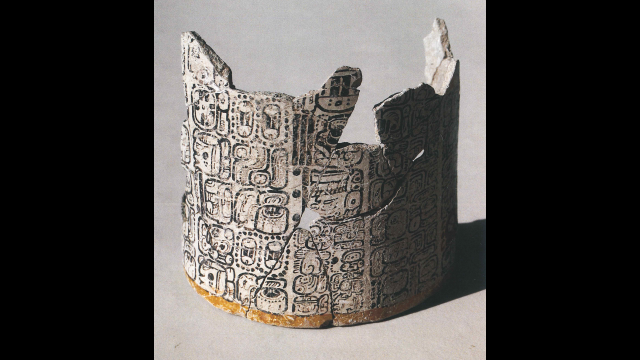 The multicolored ceramic vase, which includes a dedication date of A.D. 812, is about nine inches. “At its full length, it would have had 202 hieroglyphic blocks, making it the longest Pre-Columbian text discovered in Belize and among the top 10 longest Classic Period (A.D. 250 to 1000) texts ever discovered in the Maya area," said Hoggarth.

The 82 fragments of the Komkom Vase, named after the royal owner of the vase, were found in a large ritual deposit that had been covered with collapsed limestone blocks from adjacent structures after the site’s abandonment. Researchers painstakingly pieced them together and took a flat “rollout” photo — “kind of like putting together a jigsaw puzzle” — which was digitized for the book’s images.

Some pieces are missing, but scholars estimate it to be more than 60 percent of the original.

The vase was likely used as a ruler’s drinking vessel and makes no mention of the weather, economy or the lives of commoners. Godly kings had little use for the mundane, it seems. Though other vessels specified a purpose and even an owner, some say they were made as the frothy cacao drinking vessel for a particular ruler, such detail is missing in this.

And it can't shed any light on why Baking Pot was abandoned. It is even unknown what it was called. Baking Pot is the name given by English explorers who spotted the Maya boiling chicle in pots.

Ceremonial centers like the one at Baking Pot generally included such structures as temples, shrines, ball courts and markets, as well as off-limits residences of royalty. One account on the vase is believed to tell of the torching of Yaxha and the flight of a ruler to a place “where mosquitoes/flies abound.”

The Ritual of Abandonment

Whatever the reason for leaving Baking Pot, the Maya smashed pottery, musical instruments and other items as part of an abandonment ritual.

“Many indigenous groups in the Americas believe that living spirits inhabit inanimate objects, and that putting a hole in a ceramic item or breaking the head off a figurine releases the spirit,” Hoggarth said.

Hoggarth was awarded a National Science Foundation grant in 2015 to conduct archaeological excavations and radiocarbon dating of sites in western Belize. She wants to determine whether the abandonment of Baking Pot, in a semi-tropical river valley, and other centers mentioned in the hieroglyphics might be related to droughts and the breakdown of the political systems of Maya civilization, known for its sophisticated writing system, art, architecture, math, accurate calendars and astronomy.

The decline of the Classic period civilization and the arrival of Spanish explorers several hundred years later did not wipe out Maya history.

The Spanish burned some books because they contained religious information that wasn’t in line with Christianity, Hoggarth said. “But information compiled by Bishop Diego de Landa provided some clues, because he had Maya scribes write out what he thought was an alphabet. That helped to crack the code, and scholars can use the languages of the descendants of the Maya to help decipher it."
News Articles
More Articles All Articles
About