The two LIGO detectors alone are not able to infer the polarization property of gravitational waves because they cannot fix the position of the source in the sky. That is where Virgo, thousands of miles away, helped. The addition of Virgo as a third detector helped localize the source and allowed scientists to infer the wave's polarization. 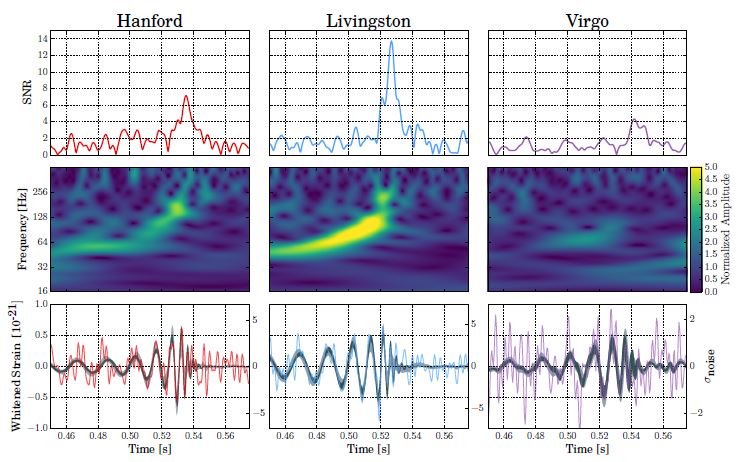 What did they learn? So far, despite numerous challengers, Einstein is still right. Virgo allowed scientists the ability to test a key prediction of Einstein's general relativity, namely the polarization property of the wave,

France Córdova, director of the U.S. National Science Foundation and a former head of the Penn State Department of Astronomy and Astrophysics, said "Little more than a year and a half ago, NSF announced that its Laser Gravitational-Wave Observatory had made the first-ever detection of gravitational waves resulting from the collision of two black holes in a galaxy a billion light-years away. Today, we are delighted to announce the first discovery made in partnership between the Virgo Gravitational-Wave Observatory and the LIGO Scientific Collaboration, the first time a gravitational-wave detection was observed by these observatories, located thousands of miles apart. This is an exciting milestone in the growing international scientific effort to unlock the extraordinary mysteries of our Universe."

FIG. 1: The GW event GW170814 observed by LIGO Hanford, LIGO Livingston and Virgo. Times are shown from August 14, 2017, 10:30:43 UTC. Top row: SNR time series produced in low latency and used by the low-latency localization pipeline on August 14, 2017. The time series were produced by time-shifting the best-match template from the online analysis and computing the integrated SNR at each point in time. The single-detector SNRs in Hanford, Livingston and Virgo are 7.3, 13.7 and 4.4, respectively. Second row: Time-frequency representation of the strain data around the time of GW170814. Bottom row: Time-domain detector data (in color),
and 90% confidence intervals for waveforms reconstructed from a morphology-independent wavelet analysis [13] (light gray) and BBH models described in the Source Properties section (dark gray), whitened by each instrument’s noise amplitude spectral density between
20 Hz and 1024 Hz. For this figure the data were also low-passed with a 380 Hz cutoff to eliminate out-of-band noise. The whitening emphasizes different frequency bands for each detector, which is why the reconstructed waveform amplitude evolution looks different in each column. The left ordinate axes are normalized such that the physical strain of the wave form is accurate at 130 Hz. The right ordinate axes are in units of whitened strain, divided by the square root of the effective bandwidth (360 Hz), resulting in units of noise standard deviations.