News Staff
The SARS-CoV-2 virus, the 2019 form of coronavirus that has caused the COVID-19 pandemic, has led to a rush of studies searching for a vaccine to prevent infection and testing existing drugs to see which one can reduce the amount of virus in infected people.

Drug development usually starts on a computer, then moves to cells and then animals. Animals, of course, are not little people, despite what anti-science activists like to claim in their war on food and chemicals, so if a drug works in all the preceding steps it will go to human clinical trials where it must survive the real challenge.

For SARS-CoV-2 research, rodents like hamsters are a good starting point because the virus replicates itself strongly after infection. Hamsters also develop a lung pathology similar to mild COVID-19 in humans, which makes them superior to mice in humans. 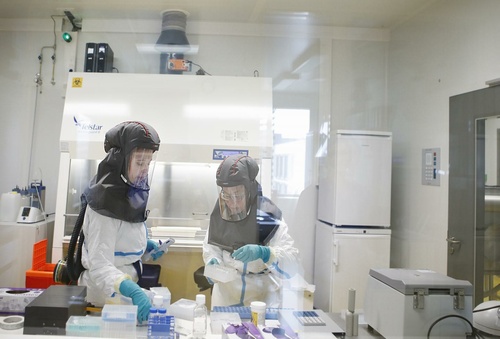 For a new study, scientists gave hamsters either hydroxychloroquine or favipiravir - a broad-spectrum antiviral drug used in Japan to treat influenza - for four to five days. They tested several doses of favipiravir. The hamsters were infected with the SARS-CoV-2 virus in two ways: by inserting a high dose of virus directly into their noses or by putting a healthy hamster in a cage with an infected hamster. Drug treatment was started one hour before the direct infection or one day before the exposure to an infected hamster. Four days after infection or exposure, the researchers measured how much of the virus was present in the hamsters.

Treatment with hydroxychloroquine had no impact: the virus levels did not decrease and the hamsters were still infectious. "Despite the lack of clear evidence in animal models or clinical studies, many COVID-19 patients have already been treated with hydroxychloroquine," explains Dr. Joana Rocha-Pereira. "Based on these results and the results of other teams, we advise against further exploring the use of hydroxychloroquine as a treatment against COVID-19."

A high dose of favipiravir, however, had a potent effect. A few days after the infection, the virologists detected hardly any infectious virus particles in the hamsters that received this dose and that had been infected intranasally. Moreover, hamsters that were in a cage with an infected hamster and had been given the drug did not develop an obvious infection. Those that had not received the drug all became infected after having shared a cage with an infected hamster.

A low dose of the drug favipiravir did not have this outcome.

Again, rodents are not little people, all animal models are only exploratory and should not be touted by journalists as having human relevance yet, but because they administered the drug shortly before exposing the hamsters to the virus, they could establish that the medicine can also be used prophylactically, so in prevention.

That merits further investigation and it will have to be determined whether humans can tolerate a high dose of favipiravir.
News Articles
More Articles All Articles
About