News Staff
Cancer starts as a single rogue cell whose mutations then trigger aggressive growth, damaging the health of the organism. But if cancer cells were accumulating harmful mutations faster than they could be purged, wouldn't the population eventually die out? How do cancer cells avoid complete genetic meltdown?

These cells helped in the development of the polio vaccine, for example, and became a biotechnology foundational resource for any in vitro drug development or cancer study. They were even the subject of a bestselling book by former Scienceblogs contributor Rebecca Skloot, because they are still used to further our understanding of cancer. 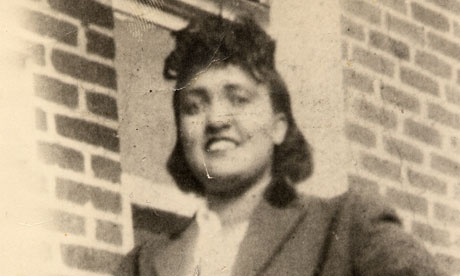 Henrietta Lacks is gone but her cells are immortal. Credit: Wikipedia

The scientists first established a HeLa cell line (E6) derived from an ancestral cell line. When the population size of E6 reached approximately 5 × 104 cells (15~16 divisions), five single-cell clones were generated and established in culture. They team DNA sequenced these clones to catalog the mutations. They focused on copy number variation (CNV) rather than single DNA changes because single-nucleotide mutation rates are too slow to produce significant sequence variation during the short-duration culturing experiments.

"We then estimated the deleterious mutation rate and the average fitness decrease per mutation by performing computer simulations of cell growth," said author Hurng-Yi Wang.

Overall, they found that the main mutations affect the copy number of genes, with an average of 0.29 deleterious events for every cell division. Each of these events reduces fitness 18 percent.

Their results indicate that heterogeneity in cell growth can be generated in a very short period of time in cancer cells and is heritable and genetically determined.

"Our estimates indicate that the HeLa cells experience a 5 percent reduction (0.29 ×0.18 ? 5%) in fitness for every generation. Our observations suggest that human cells that have been cultured for a sufficiently long period still generate deleterious mutations in the form of CNVs at a high rate and with a high intensity. For such systems, a mutational meltdown might be plausible."

For example, when they isolated 39 cells from B8 (a fast-growing clone) and 40 cells from E3 (slow growing clone), and monitored their growth from a single cell for seven days, approximately 23 percent of B8 and 50 percent of E3 cells died out within seven days, due to either damage caused during cell isolation or genetic defects.

Most cell lines with growth rates

Next, they picked about 20 cells from each of the single cell originated clones from B8 and counted their chromosome numbers.

The chromosomes varied far from the normal human number of 46. They ranged from 38 to 113 chromosomes, with most (72 percent) cells harboring between 55 and 70 chromosomes, indicating that they are triploid. Therefore, despite single-cell origin, the progeny quickly generated aneuploidy within only 20-30 cell divisions, again illustrating frequent cytogenetic change in cancer cells.

Despite the level of mutations occurring, reduction in growth rates, and chromosome numbers no longer representing that of normal humans, cancer cells still find a way to survive.

So how do HeLa cells persist?

"High deleterious mutation rate would raise an impression that the HeLa cell lines may have gone extinct long ago," said Lu.

Their simulation results indicated that although most of the cells accumulated deleterious mutations and were worse than the ancestral cells, there were still 13.1 percent of cells which were mutation-free.

"These mutation-free cells can avoid the population from extinction."

It also explains why, even if chemotherapy treatment successfully killed 90 percent of a cancer cell population, it may still not be enough.

The new study not only advances the understanding of the evolution of HeLa cells, and of tumors in general, but of the cells of multicellular organisms in culture in general. In future work, the scientists want to exploit their cancer cell fitness and growth rate findings to understand how cancer cells can become even more vulnerable to recent breakthroughs with checkpoint inhibitor drugs.
News Articles
More Articles All Articles
About