News Staff
Hydrogen peroxide (H2O2) is best known for use in bleach and hair treatments and is often invoked as a scary chemical by environmental groups promoting concern about food and products, but it is produced naturally in our bodies. A new study shows it is a useful chemical across nature; plants use it to control how their cells react to varying levels of light.

Hydrogen peroxide is a by-product of photosynthesis in parts of plant cells called chloroplasts, much like it is in our bodies by cellular respiration. Using a fluorescent protein that detects hydrogen peroxide, the researchers behind a new study in Nature Communications observed how H2O2 moves from chloroplasts and can be detected in cell nuclei.

Plants' genes are located in the nuclei, and the process discovered shows how plants activate the genes needed for the leaves to adapt to the potentially damaging effects of bright light. This process of chloroplasts communicating with the nucleus ensures that plants continue to protect photosynthesis and adjust to prevailing conditions. Photosynthesis in crop plants determines how well they grow and yield. 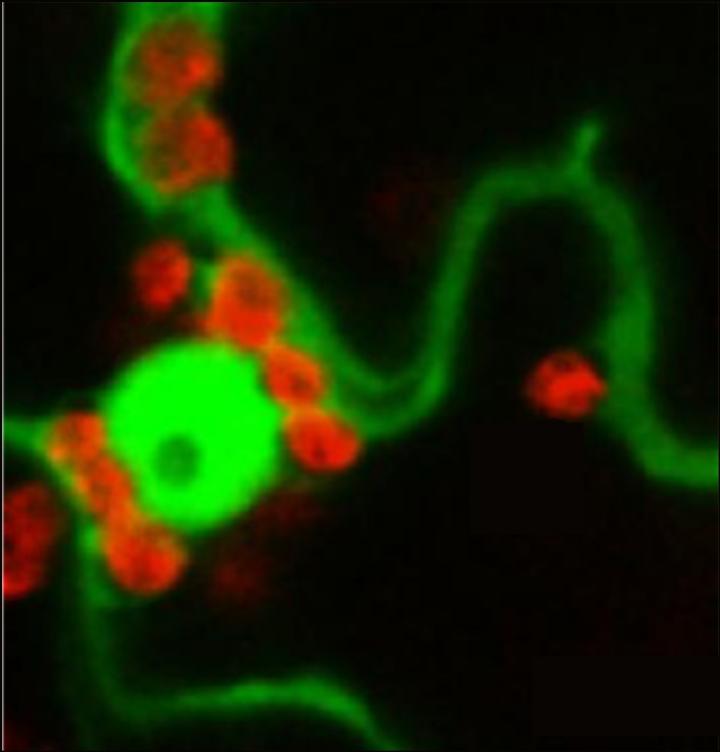 Chloroplasts (red) associated with a nucleus. The nucleus appears green due to the fluorescent hydrogen peroxide sensing protein (HyPer). Credit: University of Exeter

The scientists also found that some of the chloroplasts which produce the H2O2 signal are attached to the cell nucleus, allowing them to pass the chemical effectively.

"It's important for plants to be able to detect how much light there is, so they can make the most of it for photosynthesis," said Professor Nick Smirnoff, of the University of Exeter.

"They also have to adjust to protect themselves, as high levels of light can damage leaves - similar in some ways to how we humans get sunburn on our skin."

Professor Phil Mullineaux, of the University of Essex, said: "We know that there are a lot of different signals sent to cell nuclei to switch on genes and reorganize the way cells work, but this is the first time these signals have been observed moving from the chloroplasts (where photosynthesis takes place) to the nucleus."
News Articles
More Articles All Articles
About