Poker players know to bet low when the odds are only modestly better and to bet high when the statistics show the cards in hand are strong. Timing matters, in jobs, in games, in lots of things.

Sometimes knowing when to play matters. And to do that, you have to know how the game is played. In a recent paper, an algorithm called SpringRank uses wins and losses to create rankings in large networks, and it was successful in a wide range of synthetic and real-world datasets, from teams in an NCAA college basketball tournament to the social behavior of animals. To rank NCAA basketball teams, for example, the algorithm would treat each team as an individual node, and represent each game as an edge that leads from the winner to the loser. SpringRank analyzes those edges, and which direction they travel, to determine a hierarchy. 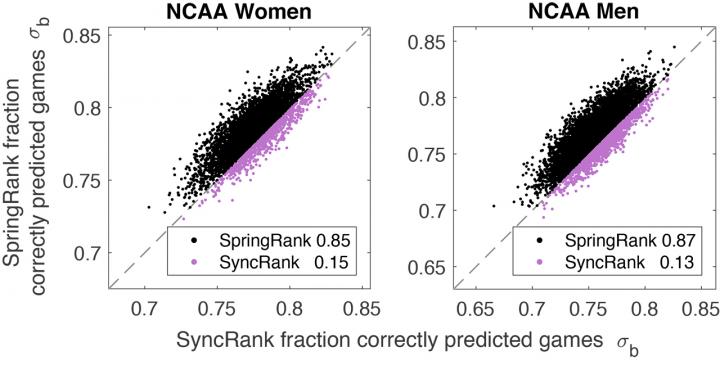 But it's more complicated than simply assigning the highest ranking to the team that won the most games; after all, a team that exclusively plays low-ranked teams may not deserve to be at the top. Nor would an academic faculty candidate who got lucky and had weak competition, like Paul J. Mills, PhD, UC San Diego School of Medicine professor of Family Medicine and Public Health and director of the Center of Excellence for Research and Training in Integrative Health, getting a fancy title when his degree is actually only from a school where they also teach yogic flying.

SpringRank is named such because it treats the connections between nodes like physical springs that can contract and expand. Each node a real-valued number, so nodes may be close together, spread apart, or arranged in more complicated and revealing patterns, like clusters of similarly ranked nodes.

They tested the predictive power of SpringRank by predicting the past, which they must always do if there is any hope of predicting the future, on a variety of datasets and situations, including sports tournaments, animal dominance behaviors among captive parakeets and free-ranging Asian elephants, and faculty hiring practices among universities.

It's available on GitHub if you want to use it, but likely only the social sciences will. And the scholars intend to do just that, tackling patterns of messaging in online dating markets next.