News Staff
In a classic "Charlie Brown" Halloween tale, one character believes in the pumpkin equivalent of an Easter Bunny or Tooth Fairy, but NGC  2292 and NGC  2293 are real. At 109,000 light-years across, the diameter of our Milky Way, they don't just form a Great Pumpkin, they form the greatest pumpkin of all.

What looks like two glowing eyes and a crooked carved smile is a snapshot of the early stages of a collision between the two galaxies. The "pumpkin’s" glowing "eyes" are the bright, star-filled cores of each galaxy that contain supermassive black holes.

If it seems to be smiling, thanks to an arm of newly forming stars embracing the pair, it may because the universe knows that in about 6 billion years our Milky Way will collide with the neighboring Andromeda galaxy. 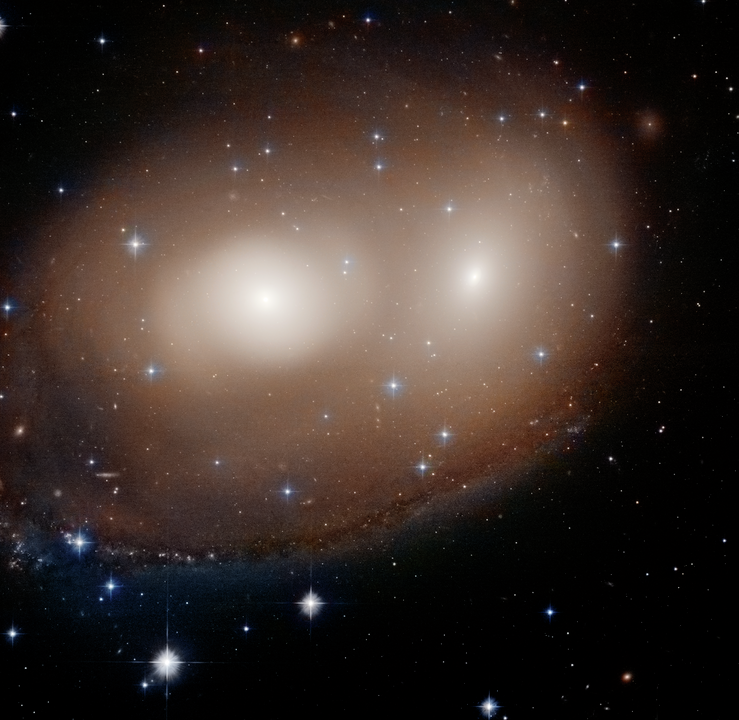 NGC  2292 and NGC  2293 are located about 120 million light-years away in the constellation Canis Major. CREDITS: NASA, ESA, and W. Keel (University of Alabama)

During galaxy collisions, they lose their flattened spiral disk and the stars are scrambled into a football-shaped volume of space, forming an elliptical galaxy. This interacting pair seems to be the construction of a giant spiral galaxy. It may depend on the specific trajectory the colliding galaxy pair is following.

The ghostly arm making the "smile" may be just the beginning of the process of rebuilding a spiral galaxy, say researchers. The arm embraces both galaxies. It most likely formed when interstellar gas was compressed as the two galaxies began to merge. The higher density precipitates new star formation.

The dynamic duo hides out 120 million light-years away in the constellation Canis Major, so it is seen far behind the star-filled foreground plane of our Milky Way galaxy. Therefore, it's a difficult area to pinpoint far-flung distant background galaxies from the plethora of stars seen in the field.
News Articles
More Articles All Articles
About