Large Multicenter Trial: Omega-3 Supplements Have No Benefit For Patients At Cardiac Risk, But Do Have Some Harm
By News Staff | December 9th 2020 02:06 PM | Print | E-mail

News Staff
Results from the STatin Residual Risk Reduction With EpaNova in HiGh CV Risk PatienTs With Hypertriglyceridemia (STRENGTH) double-blind, randomized, multicenter trial from 2014 to 2020 found that in patients with high cardiovascular risk, supplements of Omega-3 Fatty Acids were no better for outcomes than plain old vegetable oil.

This was not a small trial by a supplement company hoping to correlate something to something, this was 13, 078 patients at 675 academic and community hospitals in 22 countries. Half of those randomized got 4 g/d of omega-3 and half got corn oil, in addition to usual therapies like statins.

Looking at things like fatal and non-fatal heart attacks and stroke, the results were so overwhelming against any efficacy they ended the trial early. This is a rebuke of suspect epidemiology claims that had correlated fatty fish or omega-3 fatty acids with lower risk of heart issues. 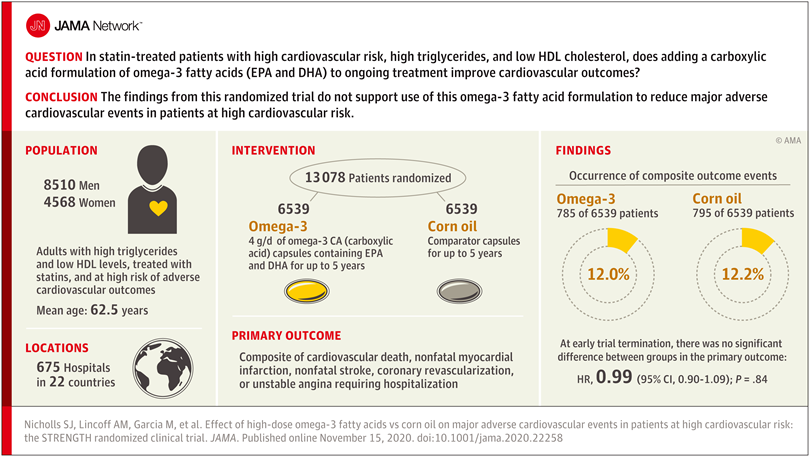 Omega-3 supplements were instead worse for people

On January 8, 2020, the trial ended early after 1,384 events in the study population because it reached the "futility boundary" - it was not statistically possible to show the supplements were helping anyone. There was instead actually higher risk of atrial fibrillation in the Omega-3 CA (Epanova; AstraZeneca) treatment group, along with a greater rate of both gastrointestinal adverse events.

Supplement sales people still have an out. The enrolled patients were on medication due to being high-risk so they can still suggest, since no science can show it, that their supplements will prevent becoming high-risk if people start taking them decades earlier, but like all magic rock thinking, belief is helping people more than the supplement.