News Staff
Discussion of the periodic table of elements often ends with simply invoking Dmitri Mendeleev, the Russian chemist who formulated the Periodic Law and used it to correct the properties of some already discovered elements, not to mention predicting the properties of eight elements yet to be discovered.

But instead of being foundational, it would have been just a quaint paper in a mining journal. had its development ended there. Mendeleev had been appointed him professor of general chemistry in 1867 and was required to lecture on inorganic chemistry. Lacking a good Russian textbook, he decided to write one, and that required truly arranging the chemical elements, something that had eluded other scholars.

That's how the story of the periodic table as we know it began but it got a lot of help along the way.

Everyone has heard of Marie Curie because who won two Nobel Prizes for her research on radioactivity and discovery of polonium and radium in 1898. But in 1875, the American chemist Ellen Swallow Richards was analyzing the mineral samarskite when she found an unidentifiable residue. That residue later turned out to consist of the two new elements samarium and gadolinium. 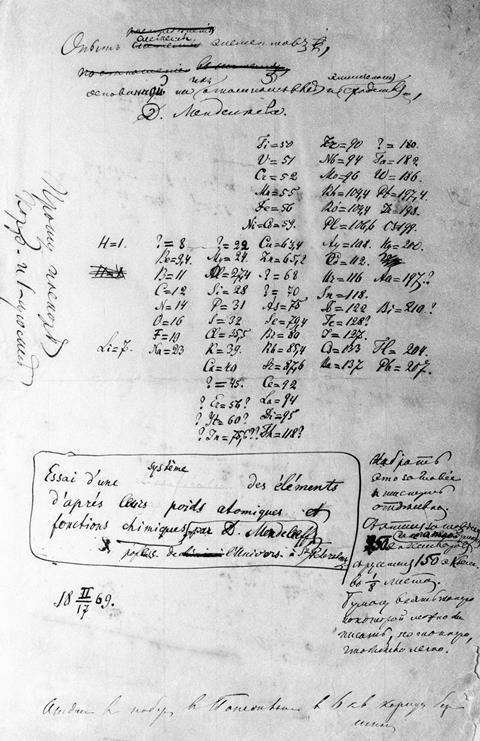 Another less well-known woman is the Austrian-Swedish nuclear physicist Lise Meitner. She and her colleague Otto Hahn first proved the discovery of element 91, protactinium, in 1917-1918. During their research work at the Kaiser-Wilhelm-Institute for Chemistry in Berlin, she was forced to work in the basement because women were not supposed to be seen.

In 1925, the German couple Ida and Walter Noddack jointly discovered element 75, rhenium. The element, named after the Rhine River, is one of the rarest substances on earth. The couple also believed that they had found an element they called masarium, but they never managed to reproduce and isolate it. Unlike Marie Curie, who was recognized for her discoveries in her own right, Ida Noddack worked as a guest in her husband's laboratory throughout her life because Germany forbade married women to have paid work.

In 1934, physicist Enrico Fermi at the University of Rome announced that he and his colleagues had discovered elements 93 and 94 by firing neutrons at uranium. Ida pointed out in a journal article in Angewandte Chemie that Fermi had failed to prove that new elements had been produced. "It is conceivable that the nucleus breaks up into several large fragments," she said,
a process we now call fission.  In 1938, Meitner and Hahn found that one of the substances that Fermi had produced was barium, an element that had been known for over a hundred years, and that the uranium nucleus had indeed split, as Noddack had indicated.

Meitner, who was Jewish, had to flee to Sweden during World War II, but when Hahn received the Nobel Prize in chemistry in 1945, Meitner was not even acknowledged. Nor did her name appear on the publication that came out in 1939, even though she had arrived at the result.

In 1939, French physicist Marguerite Perey discovered francium, the last naturally occurring element that could be extracted from minerals.

In the 1980s, American chemist Darlene Hoffman became the first woman in the United States to lead a research group that worked to produce and study super-heavy elements, substances that have atomic numbers greater than 100. One of her co-workers, Dawn Shaughnessy, now leads a research group that has been involved in the discovery of six such super-heavy elements, with atomic numbers 113 to 118.

When radioactivity was discovered at the end of the 19th century, a whole series of new substances was found, far more than there was room for in the periodic system. British radiochemist Frederick Soddy developed the idea that several elements could have the same atomic mass, but it was the Polish chemist Stephanie Horovitz who provided the experimental evidence that isotopes existed. In addition, Scottish doctor Margaret Todd suggested the term “isotope,” meaning "same place" in Greek. They occupied the same place in the periodic table and were variants of the same element. Many women were later involved in the discovery of new isotopes, such as Berta Karlik and her assistant Traude Bernert in Vienna, who proved the discovery of stable isotopes of astatine in 1943.

Gertrud Woker in Switzerland and Alice Hamilton in the United States both provided information about the dangers of lead poisoning in the early 1900s.

A number of women have also contributed to placing elements in the right place on the periodic chart. Russian scientist Julia Lermontova worked on separating the platinum-group metals (ruthenium, rhodium, palladium, osmium, iridium and platinum) as early as the 1870s, shortly after Mendeleev presented his first version of the periodic table.

The periodic system is clearly much more than one man's work, as popular representations often tell it. Behind the system, the many elements and their isotopes, many women worked side by side with men at all levels.

Happy 150th birthday periodic table, and congratulations to all of the men and women who made it possible.
News Articles
More Articles All Articles
About