Science Lost One Of Its Greatest Minds In The Trenches Of Gallipoli
By The Conversation | August 10th 2015 07:52 AM | Print | E-mail 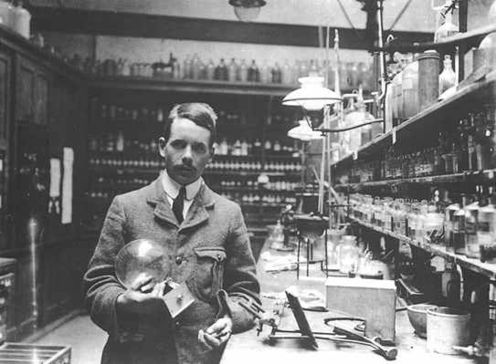 August 10, 1915. The Gallipoli sun beats down on the back of a Turkish sharpshooter. He is patient and used to the discomfort.

He wipes the sweat from his eyes and peers back down the sight of his rifle, sweeping back and forth across the enemy lines.

He’s hoping to spot a target worth taking a shot at as each muzzle flash risks giving his position away.

His sight settles on the shoulder pip of a second lieutenant. The target bends down out of sight, then reappears, now with a phone at his ear.

He stands still as he sends his dispatch. It’s an easy shot for the sniper. He squeezes the trigger and yet another young man dies. Infantry from the British Royal Naval Division in training during the Battle of Gallipoli. wikimedia

The Turkish soldier settles down in his hole, pleased with his marksmanship. He wonders if he’s made a significant difference to the war effort (probably not).

However, he may well have caused the single most costly death of the entire war. His victim, now lying in a trench on a peninsula in Turkey, is 27-year-old Henry Moseley. The loss to science is incalculable.

Despite his young age, Moseley had already made a stunning contribution to chemistry and physics. It is thanks to him that that the periodic table looks the way it does today.

He had graduated from Oxford just five years before his death. Immediately after graduating he was employed as a teaching assistant by the great physicist Ernest Rutherford in Manchester. Moseley hated it, describing his duties as “teaching elements to idiots” and his students as “mostly stupid”. His real passion was research, so in his spare time he used his energies to set up his experiments.

Moseley was working in an era of physics that was concerned with the power of X-rays. The Braggs, a father-son team working in Leeds, were developing X-ray crystallography. This allowed science to probe the atomic structure of molecules.

But instead of jumping on that bandwagon – shining X-rays at crystals to work out chemical structures – Moseley turned his attention to the elements themselves. He studied the X-rays the elements gave off when bombarded with electrons. His results had major implications for the famous periodic table in which elements are presented.

Back in 1869, Dimitri Mendeleev arranged the elements in a logical fashion. He ordered them by weight and then laid them out in a table. Next he shuffled the dimensions of his table to take similarities of elements into account. For example, lithium, sodium and potassium have similar chemical properties and were arranged in one group on a line of the table (modern tables have been flipped so that these groups are now in columns).

Likewise for fluorine, chlorine, bromine and iodine. And so the periodic table was born. The elements were now arranged in a clear sequence – and each was given an atomic number denoting its position in that sequence. But there were a few problems, some elements didn’t quite fit the order.

Their behavior suggested one position in the table, but their atomic weight put them somewhere else. So the atomic weight and atomic number of the elements didn’t quite correlate.

In Manchester, and later in Oxford, Moseley took samples of all known elements, from aluminium to gold, and measured the X-rays they gave off after bombarding them with electrons. He discovered that each element emitted a distinct frequency of X-rays, and that this frequency correlated with the atomic numbers. When he plotted the square root of the frequency, against the atomic number everything fell into straight lines on his graph.

For the first time it became clear that an element’s atomic number, corresponding to its position on the table, had a basis in physics and was not merely a convenient label. And that these numbers (confirmed by Moseley’s measurements) resolved the previous issues with the periodic table.

He also noted points missing from his graph and surmised that these gaps must be due to yet-to-be discovered elements. It was wasn’t until 30 years after his death that that the last of Moseley’s missing elements were discovered.

There is no telling what other breakthroughs might have been achieved in the alternative history in which he survived the war.

There is one more legacy that Moseley left. His death raised the question of whether great minds such as his should really be risked on the battle field. Despite the war, the international scientific community was outraged at the loss of such a renowned scientist, who still had so much to offer.

From then on scientists were used in a very different way in wars. For better or worse scientists in the next great war developed penicillin, radar, programmable computers and, of course, the Manhattan project. All these inventions had much greater impacts on World War II than any of the individuals involved could have made at the front line.

Mark Lorch is Senior Lecturer in Biological Chemistry at University of Hull. This article was originally published on The Conversation. Read the original article. Top image: A young Henry Moseley in the lab. wikimedia