News Staff
Edgar Allan Poe, The author, poet, editor, and literary critic, died in 1849 at age 40 in Maryland. He was chronically depressed, he had even tried to commit suicide using laudanum a year before his death.

But when he went to the hospital for the last time, having been found delirious and wearing a stranger's clothes, he hadn't been committing suicide, according to a heuristic look at his writing.

Using computerized language analysis, they analyzed 309 of Poe's personal letters, 49 poems, and 63 short stories and investigated whether a pattern of linguistic cues consistent with depression and suicidal cognition were discernible throughout the writer's life, particularly in his final years.

They focused on five measures which have been established as diagnostic of depression and/or suicidality;

Increased use of first-person singular pronouns (e.g., words like I, me, and my)

Fewer first-person plural pronouns (we, us, our).

These linguistic markers of depression spiked during negative events in Poe's life, like the death of his wife. Past research has shown that depressive language patterns tend to dramatically rise leading up to one's death by suicide, however, this pattern did not consistently emerge in the last year of Poe's life. 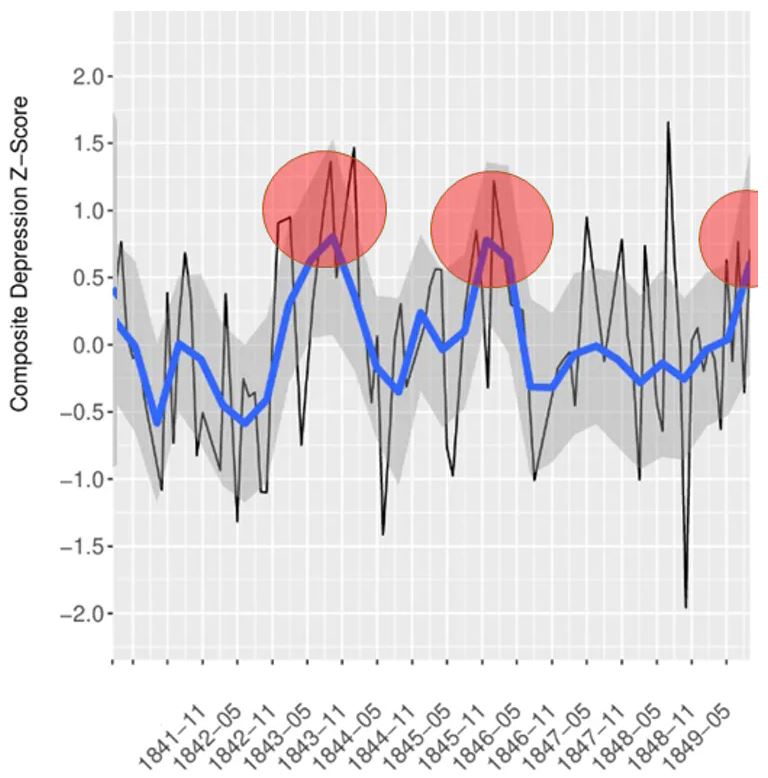 Poe was known to have suffered from regular bouts of severe depression and also had drug and alcohol problems. He lost his parents as a two year old and was devastated first by the death of his foster mother and then by that of his own wife Virginia Clemm Poe in 1847.

The researchers concluded: "Significant, consistent patterns of depression were not found and do not support suicide as a cause of death. However, linguistic evidence was found suggesting the presence of several potential depressive episodes over the course of Poe's life - these episodes were the most pronounced during years of Poe's greatest success, as well as those following the death of his late wife."