News Staff
A cosmic crash 8 billion to 10 billion years ago was a defining event in the early history of the Milky Way and reshaped the structure of our galaxy.

The Sausage Galaxy lost and the Milky Way won, fashioning both its inner bulge and its outer halo. The wreckage is all around us and the paths of the stars from the galactic merger earned them the moniker "the Gaia Sausage."

It's not over yet, the Milky Way continues to collide with other galaxies, such as the Sagittarius dwarf galaxy. However, the Sausage galaxy was much more massive. Its total mass in gas, stars and dark matter was more than 10,000,000,000X the mass of our sun. When the Sausage crashed into the young Milky Way, its piercing trajectory caused a lot of mayhem. The Milky Way's disk was probably puffed up or even fractured following the impact and would have needed to regrow. And Sausage debris was scattered all around the inner parts of the Milky Way, creating the 'bulge' at the galaxy's center and the surrounding 'stellar halo.' 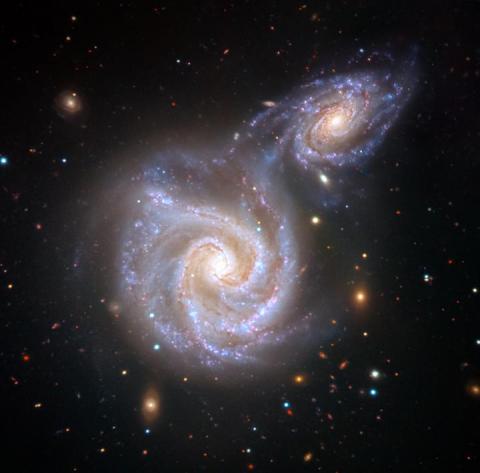 Artistic rendering of the Milky Way galaxy and the  Sausage galaxy 8 billion to 10 billion years ago. Credit:  V. Belokurov (Cambridge, UK); Based on image by ESO/Juan Carlos Muñoz

Numerical simulations of the galactic mashup can reproduce these features, and stars from the Sausage galaxy enter stretched-out orbits. The orbits are further elongated by the growing Milky Way disk, which swells and becomes thicker following the collision. Evidence of this galactic remodeling is seen in the paths of stars inherited from the dwarf galaxy, said Alis Deason of Durham University. "The Sausage stars are all turning around at about the same distance from the centre of the galaxy."

These U-turns cause the density in the Milky Way's stellar halo to decrease dramatically where the stars flip directions. This discovery was especially pleasing for Deason, who predicted this orbital pileup almost five years ago. The new work explains how the stars fell into such narrow orbits in the first place.