News Staff
A week after the Science March, environmental groups have turned up the heat on politicians, hoping to use the famous DDT strategy (ignore scientists, get a politician to do the work) to get a ban on a class of pesticides called neonicotinoids (neonics), which are sprayed on seeds so that there is less environmental strain and food waste.

Despite being in use for decades, during which bee levels have not gone down, anti-science groups like Sierra Club, Greenpeace and Union of Concerned Scientists have continued to raise money promising donors they will get them banned. They have been using a variety of techniques to reach their target goals.

It's an effort to manufacture legitimacy by using political alliances, and Sierra Club is doing the same by producing 219,210 signatures demanding a ban on neonics. EPA is about to close comments on its new risk assessments and anti-science groups are concerned that EPA will extend neonics to cotton and citrus and have already dismissed exaggerated worries about bees. For trial lawyer groups and the NGOs they have either created or use as clients, this is a Pickett's Charge. With annual surveys showing bees thriving they know they have to get bans placed fast. Joining Sierra Club are the usual sue-and-settle lawyer groups, such as Center for Biological Diversity, Center for Food Safety, Environmental Action, Environment America, Friends of the Earth, and more. 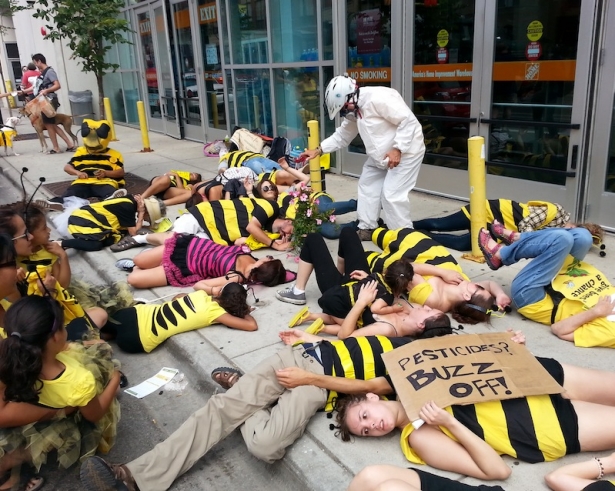 A 'die-in' outside a Chicago Home Depot on August 16, 2014, where activists protested the pesticides they claim causes mass bee deaths. Credit: Alex Kogan, In These Times

Because Science March was last week, they make it sound like the enormous battleship of government science has been quickly turned by current EPA head Scott Pruitt, who along with U.S. President Trump and all Republicans were the real targets of the march. Oregon Democrat Representative Earl Blumenauer, who is heavily funded by environmentalists, stated, "No matter what Scott Pruitt’s industry friends say, this is a problem we can’t ignore. The health of our food system depends on it.”

There is nothing accurate in his statement but accuracy doesn't get bans put in place, emotions do, and claiming our food supply is at risk without honeybees is pure emotion. Unless your diet consists solely of almonds.
News Articles
More Articles All Articles
About