Queering Of Robots Will Make Them Designed To Include The LGBTQ+ Community
By News Staff | February 13th 2020 06:31 AM | Print | E-mail

In a new short paper in the journal Nature Machine Intelligence, Roger A. Søraa from Norwegian University of Science and Technology (NTNU) and co-authors Eduard Fosch-Villaronga from Leiden University in the Netherlands, and Adam Poulsen from Charles Sturt University in Australia discuss what a queering of robots might entail.

They point out that technology is not developed in a vacuum, but instead reflects biases and reproduces societal values and beliefs.

Søraa is active in robot and cyborg research through the newly started Immersive Technology and Social Robots Lab at NTNU, and has been active in queer and gender debates, including starting the NTNU LGBTQ+ networks for employees. 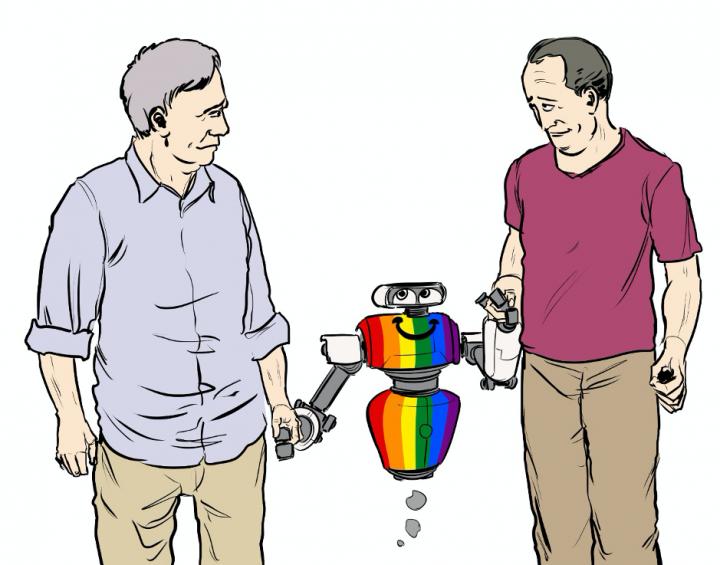 How will robots and AI respond appropriately to an elderly gay couple? It's important to make design decisions now to make certain that technology is inclusive. Image: Adam Poulsen, https://sites.google.com/view/adampoulsen

Søraa and his co-authors highlight the lack in the inclusion of queer perspectives on robots and machines. This, they argue, should be better recognized in both the research and design of the robots of the future, and should prod developers and designers to be more inclusive in how they build and create the machines that increasingly walk, talk and act among us.

"It is imperative that we construct mechanisms and policies that acknowledge the importance of inclusivity, diversity, and non-discrimination, also for the LGBTQ+ community in the development and use of robots and AI," the researchers write.